CSA said Tuesday it wants to hold talks with the agent of Kyle Abbott to discuss a report that the Test fast bowler is on the verge of signing a contract to play county cricket for Hampshire.

Le Cap: Cricket South Africa (CSA) said Tuesday it wants to hold talks with the agent of Kyle Abbott to discuss a report that the Test fast bowler is on the verge of signing a contract to play county cricket in England. Hampshire expect to secure the services of Abbott on a long-term deal which would preclude him from playing for South Africa, according to a report on the ESPN Cricinfo website. “We will discuss it with his agent,” a Cricket South Africa spokesman said. Abbott, 29, has become a key member of the South African bowling attack recently after spending much of his career on the fringes of the national team. He is currently playing in the second Test against Sri Lanka at Newlands, going into the match with a record of 39 wickets at an average of 21.30.

He made a sensational debut when he took seven for 29 against Pakistan at Centurion in February 2013 after being called up as a late replacement. But he played in only two more Tests over the next season because he was below Dale Steyn, Vernon Philander and Morne Morkel in the selection pecking order. The emergence of Kagiso Rabada also kept Abbott on the reserve list more often than on the field.

But when Steyn was injured in the first Test in Australia in November, with Morkel already ruled out, Abbott grabbed his chance and was man of the match in South Africa s series-clinching win in the second Test in Hobart, taking nine wickets for 118 runs. With Steyn s injury likely to be long-term, Abbott would likely be a key member of South Africa s team when they play four Tests in England later this year. 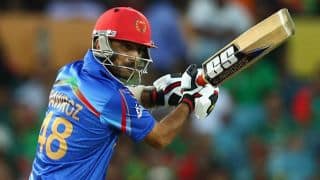