The curator at Basin Reserve has said whichever team wins the toss will bowl first.

There would be no respite for the Indian batsmen from the New Zealand pacers as the Basin Reserve pitch, under cover for the last few days, would be a green, seamers’ paradise, curator Brett Sipthorpe said on Tuesday.

The second Test between India and New Zealand will start from Febraury 14 at Wellington, with the visitors trailing the two-Test series 0-1 after losing the first rubber in Auckland by 40 runs with an entire day to spare.

“I don’t expect they (India) will be too happy when they see that,” Sipthorpe was quoted as saying by the stuff.co.nz.

Four days of rain had hindered pitch preparations for the final test, but the showers eased to finally allow some work.

Sipthorpe has had produced wickets with lively pace and bounce and the Black Caps had requested him the “same again” pitch on which they romped to an innings and 73-run victory over the West Indies in December.

Sipthorpe said it was a guarantee that the toss winning captain would bowl first on Friday.

“It’s had good pace and bounce in it this summer and basically we’re aiming for exactly what we had for the West Indies one. That was nice and bouncy and had a little bit of nip around, which suits the seamers,” he said.

“It just depends on what the weather brings us. If we have to take a little more off we will, but we don’t want to lose our pace and grass cover is pace. We’ll do everything we can to try to keep as much grass on as we possibly can,” he added.

Sipthorpe said bounce, rather than spin, would be key to success at Basin Reserve.

“With the weather we’ve got leading into this one, there’s almost no chance of it drying out to bring spinners right into it. I think the bounce will be the key.” 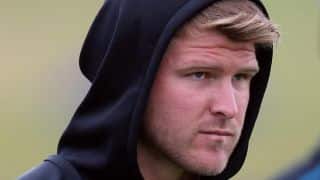