Former England all-rounder Andrew Flintoff has ranked the current English side under Andrew Strauss above the Michael Vaughan-led team that won the Ashes back after 16 years in 2005. 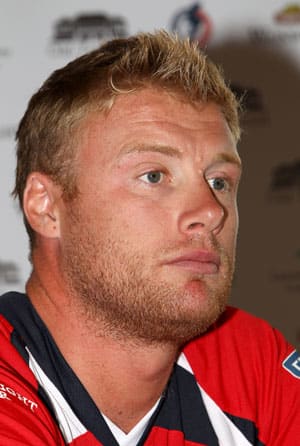 Former England all-rounder Andrew Flintoff has ranked the current English side under Andrew Strauss above the Michael Vaughan-led team that won the Ashes back after 16 years in 2005.

Flintoff, who was the star of the 2005 Ashes victory that is arguably England’s greatest achievement in recent times, said he believes that present bunch is much superior in almost every department of the game.

“This is a better side than the one we had in 2005. The strength of it and the depth of it is incredible,” Flintoff told mediapersons.

Stating that all the eleven players who were a part of the 2005 Ashes victorious team never played together again, Flintoff said it was unfortunate that many cricketers of that group got injured or announced retirement.

“In 2005 we had 11 players who had a memorable few weeks and played at their best for a period, but we never played together again. Colly (Paul Collingwood) came in for the last one, but essentially it was just a team.

“We had a few big wins before 2005, but it was all about peaking for that series and we did, but we couldn’t sustain it due to injuries and retirements,” he said.

The former England skipper, whose career was cut short by injury after the Ashes win of 2009, said that the depth of the present English side is the strongest ever.

“This side have a squad and they are so strong. We’ve seen them replace players without blinking and it has made no difference to the performance. They are the best in the world already. Not just in ranking but also in strength. They have got everything. I don’t see why they can’t dominate for a long time,” Flintoff said.

He also said that there were no weak links and they should be able to dominate world cricket for a next few years.

“They have strong enough players do it. Australia and West Indies did it and England should be able to do it for next few years. There are no weak links,” the 33-year-old said.

“They are playing with a confidence and a swagger that goes with being the best. They’ve got every department covered. It is a fantastic group of players that clearly work very hard and they enjoy what they’re doing,” he added.

Flintoff, however, said that it was unfair that when England were getting hammered in the 1990s and early 2000s and couldn’t buy a Test match, everyone blamed county cricket.

“Because Australia were doing well the state system was seen as the best. Well now things have changed I want to know whether those doom-mongers would give county cricket the recognition it deserves,” asked Flintoff.

Although, Flintoff could not watch the second Test between India and England at Trent Bridge, he said he was impressed by the re-emergence of Stuart Broad.

“Stuart (Broad) has been brilliant in the way he has responded to a dip in form and he’s got that nonsense about ‘the enforcer’ out of his system.

“What is it? I cringe every time I hear it and it is just a bizarre thing because we’ve seen Broady’s strength in this Test. He’s got the ability to swing it and together with the odd bouncer and variation he is a danger when he pitches it up,” he said.

Heaping praise on captain Andrew Strauss and coach Andy Flower, Flinoff said, “Credit to Straussy and Andy Flower for what they’ve done. They’ve got a good group of players who are prepared to work hard and enjoy it. I’d imagine it is a cracking atmosphere and an easy team to run.”

Lee embraces Twenty20 as the third form of the game