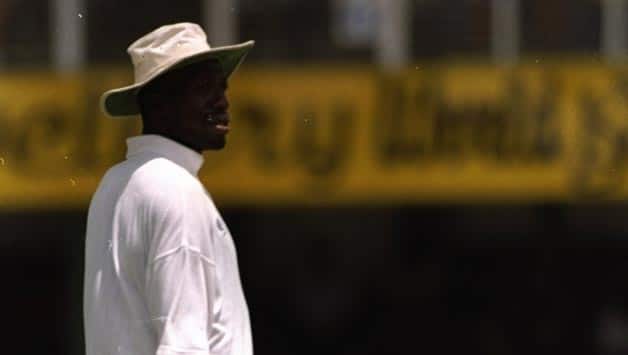 Sir Vivian Richards, who captained Curtly Ambrose (above) from 1988 to 1991, said the determined bowler put a lot of work into his game, calling him a “dream to captain” © Getty Images

The former Antiguan, Leeward Islands and West Indies pacer celebrated his half century on Saturday and former captain Sir Vivian Richards, former pacers Courtney Walsh, Kenneth Benjamin and Winston Benjamin all appeared on a local radio programme alongside Ambrose on Friday, as they spoke of the player’s cricketing achievements while congratulating him on reaching this milestone.

Sir Viv, who captained Ambrose from 1988 to 1991, said the determined bowler put a lot of work into his game, calling him a “dream to captain”.

“He is one of those individuals who spent time on the field. You look at modern day fast bowlers, they play two matches and miss six, and things like that cannot keep a steady routine,” said Sir Viv during a programme on Observer Radio.

“But this guy is strong regardless of this boney frame, seriously strong, and that is why he was able to accomplish what he did in terms of the wickets he got in Test match cricket. Spending time on the field, you could never, ever do so off it and I guess he is a complement and he was a dream to captain, a real soldier.”

Walsh, who doubled with Ambrose to become the most dangerous pair in both Test and One-Day Internationals between 1988 and 2000, said they created a bond that even today remains unbroken.

“I say it without fear anywhere I go: Ambrose is like my brother. I played more against Winston, and Kenny in County cricket because ‘Ambi’ came on the scene late in terms of that and didn’t like much of it and we have always been friends; but Ambrose and I have built up a certain bond and if it wasn’t for cricket and the things we did on the field probably that bond would not be there,” said Walsh.

“And we don’t wait to get in touch; we are always in touch and it is something I cherish and will always cherish because he’s the brother that I probably didn’t have and we have bonded so well together and that is why we bonded so well as fast bowlers. We didn’t compete against each other. We complemented each other.”

“Ambi”, as he is affectionately known to his former team-mates, thanked those gathered for believing in him and his ability to do well, saying it was a joy stepping onto the pitch and representing his country.

“When I started, because of my frame, a lot of people figured I wouldn’t last more than a year or two in international cricket. But I come from country and I know I used to run cattle and sheep and goats and things, so I am strong; and I knocked down mangos and coconuts and I knew I was strong.”

“I was surrounded by some wonderful players as well, which made it a lot easier so I wouldn’t trade it for the world. It was a pleasure for me to represent my country with distinction,” Ambrose added.

Ambrose and his former teammates toasted champagne and a cake which depicted a field with a cricket pitch in the middle as well as a ball that had knocked over the stumps.