Ambrose has been working with the likes of Taylor, Roach, Gabriel and Miguel Cummins.

Former fast bowler Sir Curtly Ambrose says he hopes to use his new position as bowling consultant to the West Indies to help return the regional side to its former glory.

Ambrose, who was appointed to the position last month, has been working with the likes of back-from-injury quickies Jerome Taylor and Kemar Roach, Shannon Gabriel and young Barbadian bowling sensation Miguel Cummins, reports CMC. “I took on the role because I figure that my knowledge and my experience would mean a lot to these young cricketers of today,” said Ambrose.

“I am just hoping that whatever I bring to the table, it is something fresh, and something that will make these guys much better cricketers, and, in the process, help to push West Indies cricket back to the top.” Ambrose joined the team after serving as coach of the Combined Campuses and Colleges (CCC). The CCC, a constant thorn in the sides of established territorial teams, made it to the final of the regional one-day tournament last year.

“It is never a question of talent. We always had that,” said Ambrose a veteran of 98 Tests who during his career took 405 wickets at an impressive average of 20.99. “It’s just that they [West Indies bowlers] perhaps need a little motivation from someone, who has been there,” said the 50-year-old Ambrose”. 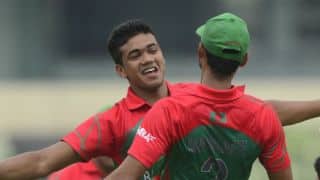