South Africa have received a shot in the arm ahead of their four-match Test cricket series with Dale Steyn having recovered from the groin strain.

Cape Town: South Africa have received a shot in the arm ahead of their four-match Test cricket series with pace spearhead Dale Steyn having recovered from the groin strain he suffered against India in November. “Dale has put a lot of work into his training and rehab since his return from India so we are very happy to have him back from injury,” Proteas team manager, Mohammed Moosajee was quoted as saying by the BBC on Friday. “He was put through a thorough fitness test on Thursday by physiotherapist, Shane Jabaar, he came through the tests without any discomfort and will be available for selection for the first Test match against England.” The first of the four-match Test series begins in Durban on December 26. The 32-year-old has taken 402 wickets in 81 Tests at an average of 22.56, including 46 in 11 matches against England. FULL CRICKET SCORECARD: South Africa vs England 2015-16, 1st test at Durban

Earlier, it was reported that Steyn is on track to play the upcoming Test series against England. Confirming the news, the Cape Cobras physiotherapist Shane Jabaar revealed that the Cricket South Africa’s (CSA) medical team had asked them to conduct a fitness test on the 32-year-old and that the player passed all the required tests, Sport24 reported. Steyn experienced a tightness in his groin during the second day of the opening Test against India in Mohali and was subsequently ruled out of the second and third Tests. South Africa, which recently suffered a humiliating 0-3 defeat in a series against India, will now aim to bounce back when they will take on England in the four-match series, starting from December 26 in Durban, reported ANI. Dale Steyn on track to play Test series against England 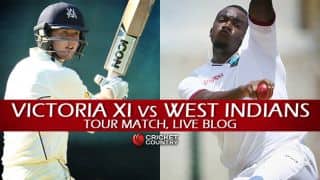