Dale Steyn has suffered another injury blow after he hurt his groin while playing for Hampshire in a County Championship match on Monday.

South Africa’s Dale Steyn has suffered another injury blow after he hurt his groin while playing for Hampshire in a County Championship match on Monday.

He was into his 11th over and had bowled four deliveries, still searching for his first wicket against Nottinghamshire, when he left the field midway after a brief discussion with his captain James Vince. Liam Dawson then completed the over.

The extent of the injury will be known after an assessment on Tuesday. The 35-year-old has had a terrible run-in with injuries over the past two years. In 2017, he hurt his shoulder in Australia and sat out for the better part of the year. Then in February this year, he picked up a freak injury on return to Test cricket against India at Newlands. He was subsequently ruled out of the series.

He returned to international cricket last month in a two-Test series against Sri Lanka in which he managed just two wickets.

Steyn has already made his intentions clear to quit limited-overs cricket after the 2019 World Cup but is eager to extend his Test career as long as possible. “I will be trying to get to that World Cup (in England). But after the World Cup I don t see myself playing white ball cricket for South Africa. By the time the next World Cup comes, I will be 40, Steyn had said last month.

Steyn is tied with Shaun Pollock with 421 wickets each in the list of all-time leading wicket-taker for South Africa. He will have to wait for sometime to claim that record for himself as South Africa next play Tests when they host Pakistan in December for a three-match series. Since making his debut in 2003, Steyn has played 88 Tests and picked up 421 wickets at an average of 22.64. 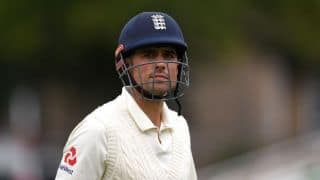