Royal Challengers Bangalore (RCB) completed an emphatic 21-run win against Gujarat Lions (GL) in Match 20 of Indian Premier League (IPL) 2017 on Tuesday. Chris Gayle stole the limelight with a blistering 38-ball 77. During his innings Gayle also became the first to reach 10,000 T20 runs. With AB de Villiers, Samuel Badree and Tymal Mills all injured, a lot depended RCB s famed top-order batsmen. Gayle, out of form for some time, delivered when it mattered. Speaking about Gayle s innings and the injury situation in the RCB camp, head coach Daniel Vettori said, Good thing about international cricketers is that they probably talk to themselves more than any captain or coach talking to them about their performances,” said Vettori at the post match press conference.

“They take pride in their performances, they really want to contribute to the team and Chris is a really prideful man, he wants to do well for RCB, do well for any team he plays for. Chris, as powerful and strong he is, can take any powerful bowling attack down. Samuel Badree [is] injured, Tymal [is] injured and obviously AB [is] injured. We have the likes of Chris, Travis [Head], Adam [Milne] and Shane [Watson] to go on in these situations makes a huge difference. FULL CRICKET SCORECARD: Gujarat Lions (GL) vs Royal Challengers Bangalore (RCB) IPL 2017, Match 20

When we went to the auction process we wanted to increase out bench strength and fortunately today it has come through for us, Vettori added. Vettori believes that he will have all the players back in time for the game on April 23 against Kolkata Knight Riders (KKR) at the Eden Gardens: Fortunately we don t play till the 23rd, that allows us bit of recovery time. We are hopeful that AB is fit for that, hopeful that Samuel is fit for that, hopeful that Tymal is fit for that. So, they do have an extended period of time before we play again. So, [I am] reasonably confident that they will be available to play. But it s good Chris and Travis stood up today. So, we have more selection dilemmas. READ: Chris Gayle says achieving 10,000 runs in T20 cricket is special after RCB beat GL by 21-runs

Vettori also spoke about when RCB decided to bring leg-spinner Yuzvendra Chahal into the side: I ve been lucky enough to work with Yuzi for the last four years and also play against him when he was with Mumbai. They way he bowled in the Champions League final four years ago is the reason we wanted to get him into RCB. He is one of those guys who is competitive, coupled with a lot of skill. Those two for a spin bowler make for formidable combination. He is really positive, he is really confident about what he is doing and he is also really skilful. Anybody who can succeed at the Chinnaswamy as a spin bowler, you know there is something special about them and we saw that again today with his performance. READ: GL vs RCB, IPL 2017, Match 20: Records galore and other highlights

Vettori does not think that the team is suffering from fatigue. I think the guys enjoy playing repeatedly. They play, travel, play because they are getting the opportunity to get into a game to compete and try and win games. Sometimes when you have an extended break, you get rusty and training becomes boring. So, if you can stay injury-free then it s great; if you can t then that makes it a little difficult. 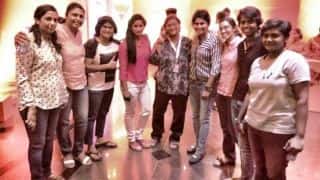