Former Pakistan leg-spinner Danish Kaneria's lifetime ban from cricket remained in place on Tuesday after the England and Wales Cricket Board (ECB) rejected his appeal at a hearing in London. Former Pakistan leg-spinner Danish Kaneria‘s lifetime ban from cricket remained in place on Tuesday after the England and Wales Cricket Board (ECB) rejected his appeal at a hearing in London.

Kaneria was given a life ban by the ECB last year after a panel found him guilty of inducing his then Essex team-mate Mervyn Westfield to deliberately under-perform by agreeing to concede a certain number of runs in return for money while bowling in a county one-day match in 2009.

Although imposed by the ECB, the now 32-year-old Kaneria’s ban was effectively a worldwide sanction as all boards under the jurisdiction of the International Cricket Council (ICC) have agreed to uphold punishments imposed by individual member countries in such circumstances.

It was not until 2010 that the scandal became public when Essex police arrested both Kaneria and Westfield. However, the Pakistani was released without charge and has maintained his innocence throughout.

By contrast, legal proceedings against Westfield continued and he spent two months in prison, as well as being banned for five years from first-class cricket and three from recreational cricket by the ECB.

Tuesday saw an appeal panel of the ECB’s cricket discipline commission uphold Kaneria’s ban in full although it chose to ‘vary’ the sanction imposed on Westfield by saying he could return to club cricket on April 1 next year, provided he take part in a “stringent” anti-corruption programme.

“An appeal panel of the cricket discipline commission today upheld the life ban imposed on Mr Danish Kaneria by a disciplinary panel in June 2012,” an ECB statement read.

“At a hearing in April 2013, the appeal panel had found that he had been guilty of two charges under the ECB’s regulations.

“The panel varied the sanction imposed on Mr Mervyn Westfield. He has been banned from all forms of cricket for five years from the 17th February 2012, but will be permitted to participate in club cricket after April 1st 2014 provided that he has co-operated fully with the Professional Cricketers’ Association’s stringent anti-corruption education programme.”

Kaneria, who has repeatedly protested his innocence, has now seen two appeals against ECB charges fail after a CDC panel dismissed his case in April.

During his criminal trial last year, Westfield named Kaneria as the figure who induced him into accepting £6,000 ($9,000) from a bookmaker to under-perform in the 2009 match. 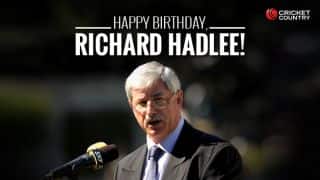 Richard Hadlee: A phenomenon in the pantheon of the greats