Darren Lehmann has entered the phase of promoting the game in USA, stating that cricket, especially T20 could be a major stop in the USA.

Former Australian player and current coach Darren Lehmann has entered the phase of promoting the game in the prestigious nation of United States of America (USA), stating that cricket, especially Twenty20 (T20) could be a major stop in the USA, and has also stated that awarding the hosting right to the nation for the prestigious ICC World T20 could be a major boost for the sport in the nation, where the game is slowly and steadily growing. Recently, NBCSN has signed a deal to broadcast 10 of Australia’s Big Bash League matches, while T20 cricket, including Caribbean Premier League (CPL) and international matches, were played earlier in 2016 at Florida. FULL CRICKET SCORECARD: Australia vs South Africa, 1st Test at WACA, Perth

“The Twenty20 circuit could include a stop in the United States, a country that could also be targeted for hosting a World Twenty20, which would be the best way, at least in my opinion, of breaking the game there. Cricket can undoubtedly be a success in the US thanks to the already significant supporter base that exists there among its large Asian community,” Lehamnn was quoted saying by Fairfax. Thakur: BCCI has put plans of hosting Mini IPL in USA on hold

“And a global event has the potential to capture the attention of those not necessarily interested in the sport already. Soccer took the World Cup to the USA in 1994 and the benefits of doing that can now be seen, two decades on, with the growth of Major League Soccer, while rugby union has also grasped the nettle by awarding its 2019 World Cup to Japan, a country it sees as its next big market,” he added.

Meanwhile, Cricket Australia (CA) has renewed broadcasting rights with USA’s only cricket channel Willow, as they would be broadcasting Asutralian cricket for the next five years, which includes Tests, ODIs and T20s, and also includes women’s international matches, along with BBL and also the Women’s Big Bash League. The Willow subscribers in USA can also watch the live streaming of the matches on cricket.com.au. The same deal has been made in Canada with Asian Television Network (ATN) for the next five years, and the Candian subscribers too can enjoy the live streaming on the same platform. 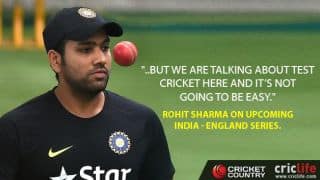