Darren Sammy: I won't be captain anymore of West Indies T20 side

Darren Sammy: I won't be captain anymore of West Indies T20 side

West Indies's Twenty20 International (T20I) skipper Darren Sammy was on Thursday sacked as the skipper of the side.

West Indies‘s Twenty20 International (T20I) skipper Darren Sammy was on Thursday sacked as the skipper of the side. On Friday, Sammy went on to his official Facebook page where he posted a video of himself and claimed that he won’t be cpataining the side any more, apart from explaining the whole scenario with the West Indies Cricket Board (WICB). Sammy claimed that he got received a call from the selectors of the WICB, when he was told that following the review of his captaincy in the T20 format for the Windies, he has be sacked as the skipper of the side. Sammy is currently leading the St. Lucia Zouks in the ongoing edition of the Caribbean Premier Leeague (CPL). Darren Sammy concerned over elongated schedule of England’s NatWest T20 Blast

“I got a call yesterday morning, it was probably 30 seconds, from the chairman of selectors telling me that they’ve reviewed the captaincy of T20 and I won’t be captain anymore of the T20 team, [and] my performances have not merited selection in the squad. That’s ok, I’ve always believed West Indies cricket is not about Darren Sammy. They are looking to the future and I wanna wish the new captain – I don’t know if it’s out yet so I won’t call any names – all the best as he looks to lead West Indies cricket and take it forward,” said Sammy in his video, he posted on Facebook. Chris Gayle is one of West Indies cricketing heroes: Darren Sammy

“Obviously, throughout my captaincy, winning the two [T20] World Cups has been the highlight. And these memories I will cherish for a long time. This is not me retiring from one-day or T20, it’s just me thanking the fans and my players and the coaches I’ve worked with and WICB for yea, letting me lead the side for the last six years. But for now the captaincy has come to an end and thank you people. “I just know I played with my heart and soul whenever I stepped out on the cricket field,” he further added. 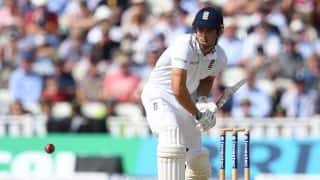