Darren Sammy praise bowlers for putting up a strong performance

Darren Sammy praise bowlers for putting up a strong performance

West Indies captain Darren Sammy praised his bowlers for bundling out a strong Indian batting line-up for a meagre total and said they would be looking to set a 350-plus target for the home team in the fourth innings of the ongoing first Test. 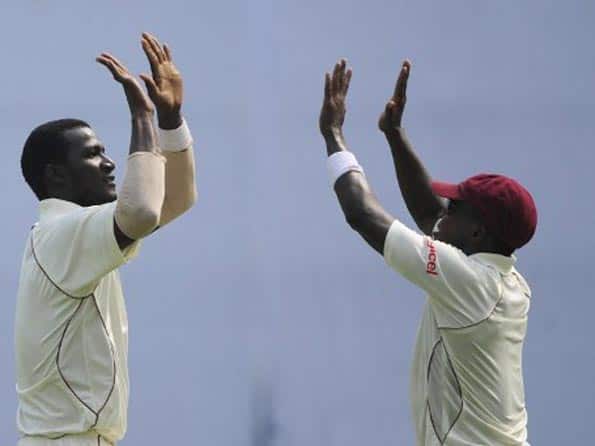 West Indies captain Darren Sammy praised his bowlers for bundling out a strong Indian batting line-up for a meagre total and said they would be looking to set a 350-plus target for the home team in the fourth innings of the ongoing first Test.

Sammy said his bowlers’ plan of bowling wicket-to-wicket on a low and slow Ferozeshah Kotla Stadium pitch paid rich dividends for the visitors, who bowled out India for a paltry 209 in their first essay.

“Our bowlers did a great job today to bowl India out (for 209). Considering the slow and low pitch, the plan was to bowl at the right areas and from wicket to wicket. We stuck to the plan,” Sammy said at the end of the second day’s play today.

“It was not a perfect day for us but we supported each other and played fearless cricket and it paid off,” he said, as the Caribbean side increased their lead to 116 runs with eight second innings wickets still in hand.

Asked about any target his side would like to set for India in the fourth innings, Sammy said, “We want to score minimum of 250 runs in our second innings and set 350-plus for India as they have very good batsmen in their ranks.”

“We expect India to come hard on us. We would play fearless cricket and if we stick to our plan we can come on top,” said the 28-year-old all-rounder.

Sammy said he was not surprised by the nature of the Kotla pitch as they have played on such kind of a surface in Bangladesh in their recent Test series.

“We have come across such slow and low pitches in Bangladesh and that has helped up in preparing our game here.

Like Shivnarine Chanderpaul said you have to be patient and stay at the crease as long as possible and runs are there to be scored,” he said.

“Fidel was our strike bowler and he was bowling very well. So I thought why should not I give the ball to my best bowler to bowl at their premier batsman,” he said.

With Virender Sehwag and Gautam Gambhir coming out all guns blazing at the top, India were scoring at more than seven runs per over initially, but Sammy said he was not at all worried as he knew the run rate would drop once the ball becomes old.

“We had a similar experience in Bangladesh and I knew that once the ball was old the run rate would be down. At lunch break I told my players to maintain line and length and stick to basics. We did that and it paid off,” he said.

He refused to buy the line that his inexperience bowling attack lack the firepower to take 20 wickets to win a Test.

“It’s not like that. We bowled out India four times when they last visited us and our bowlers have the capability to do that,” he said.

Sammy praised Indian left-arm spinner, Pragyan Ojha, who took six wickets and played a major role in dismissing the West Indies being for 304 in their first innings.

“Whenever West Indies play there is this question of a left-arm spinner doing well against us. We will watch the footage how he bowls and plan accordingly in our second innings tomorrow. Hopefully, we can play better against him (in second innings),” added the Caribbean skipper.(PTI)