Dasun Shanaka's registered the joint second-most number of sixes hit in an innings behind only Chris Gayle.

Dasun Shanaka has broken the record for most sixes hit in a domestic Sri Lankan T20 innings helping himself to 16 hits for maximum in his knock of 123 from a mere 46 deliveries at a strike-rate of 267.39! Overall, it comes at a joint second on the world ranking for most sixes by a player in an innings behind only Chris Gayle who once hammered 17 sixes in Royal Challengers Bangalore (RCB) colours and joint with Graham Napier who smacked 16 sixes for Essex against Sussex in 2008. The surprising element of Shanaka’s innings was that though he was in form good enough to hammer 16 sixes he only managed two fours.

His fiery knock propelled the Sinhalese Sports Club (SSC) to a mammoth total of 251 in the stipulated 20 overs for the loss of six wickets. Set a daunting task of chasing 252 for victory, the opposing Saracens Sports Club succumbed meekly for a team score of 128 — only five runs more than that scored in Shanaka’s innings.

To put things in perspective, apart from Shanaka, batsmen from either side managed a total of just nine sixes — almost half that of Shanaka’s individual tally. Shanka’s effort helped Sinhalese Sports Club innings enter the record books for most number of sixes in an entire innings at No. 2.

In all, the innings witnessed 20 sixes — bettered only by Royal Challengers Bangalore (RCB) who scored 21 sixes in the same game against Pune Warriors India in the 2013 Indian Premier League, the very match Gayle had hit 17 sixes for his whirlwind 175. Apart from Shanaka’s big hits, there were a couple of sixes from Minod Bhanuka while Thisara Perera and Ramesh Mendis hit one six each to take the team tally to 20 sixes.

Shanaka’s fiesty knock is not out of the blue either. Only the previous week he smashed a 48-ball 131 against Galle CC in an innings that saw a greater balance between sixes (12) and fours (10).

When an angry Mitchell Johnson bowled bouncers at Phil Hughes 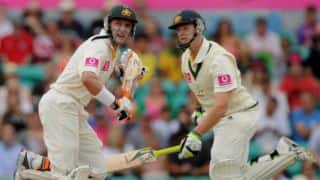