Dasun Shanaka claimed a five-wicket haul on debut, as Sri Lanka registered a convincing 76-run win over Ireland in the first ODI at Dublin.

Sri Lanka‘s medium-pace bowler Dasun Shanaka, who was playing his debut One-Day International (ODI), claimed a five-wicket haul, as his figure of 5-43 allowed visitors Sri Lanka to register a convincing 76-run win, via D/L method, over hosts and minnows Ireland in the first of the two-match ODI series at The Village stadium in Dublin on Thursday. Earlier, Ireland skipper William Porterfield won the toss and elected to field first, as Sri Lanka finished on a challenging total of 303 for the loss of seven wickets in 50 overs, courtesy of a match-winning knock of an unbeaten 100 from Dinesh Chandimal. FULL CRICKET SCORECARD: Ireland vs Sri Lanka 2016,1st ODI at Dublin

The Irish openers in the form of Porterfield and Paul Stirling were off to a steady start, putting up the opening 53-run stand before Stirling fell for 27 to Dasun Shanaka in the 12th over. Just 18 runs added to the total, it was Ed Joyce, who fell for mere nine to Shanaka again, after being caught behind by Chandimal in the 16th over. Just 20 run later, at the score of 91, he was followed by John Anderson, who fell for mere seven to the same man in the same manner at the 20th over.

However, it was followed by a 68-run stand for the fourth wicket between Porterfield and Kevin O’Brien, as Porterfield brought up his half-century, but fell for 73 to Shaminda Eranga, after being caught by Kusal Perera, in the 31st over, before rain stopped play. As the play resumed, the overs were reduced to 47, and the target was revised to 293. At the score of 198, it was Stuart Poynter, who fell for mere 20 to Shanaka, who bowled him up in the 36th over. FULL CRICKET UPDATES: Ireland vs Sri Lanka 2016,1st ODI at Dublin

With seven runs added to the total, it was Gary Wilson, who fell for a mere single to Angelo Mathews, who trapped him leg before in the 37th over. Meanwhile, Kevin brought up his half-century. However, at the score of 211, it was followed by the wicket of Kevin, who fell 64 to Nuwan Pradeep, after being trapped leg-before in the 38th over. There were hardly any partnerships following his wicket as all the incoming batsmen from hereon fell for single figures, and even without scoring, as the Irish were shot out for 216, thus allowing Sri Lanka to win the tie by 76 runs, while Shanaka claimed a five-wicket haul on debut. 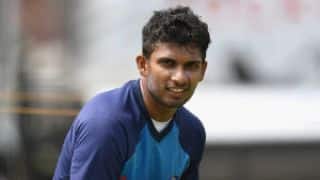 Sri Lanka vs Ireland, 2016: Dasun Shanaka enters record books with 5 for 43 on debut