ECB's lack of clarity over why Pietersen was axed has provoked a huge public backlash.

British Prime Minister David Cameron on Thursday became embroiled in the row over the end of Kevin Pietersen‘s England career, saying there was a “powerful argument” in favour of the star batsman.

Pietersen was axed from all England duty on Tuesday, with officials at the England and Wales Cricket Board (ECB) citing a need “to rebuild not only the team but also the team ethic and philosophy” following the side’s 5-0 Ashes thrashing in Australia.

But the departure of the gifted Pietersen, and in particular the ECB’s lack of clarity over why he was being jettisoned, has provoked a huge public backlash.

One of Pietersen’s most prominent supporters has been his friend, CNN interviewer Piers Morgan, who has been scathing of the decision to call time on his England career.

But Cameron, in an interview broadcast Thursday by BBC Radio Lancashire, said he found himself in “sympathy” with Morgan regarding Pietersen.

“I am an enormous fan of Kevin Pietersen and I have had some of my most enjoyable times watching him tonking the ball all over the park,” Cameron said.

“His average [47.28 in Tests] is remarkable. It is not often I have sympathy for Piers Morgan but I thought he was making quite a powerful argument this morning on my radio. But I will let the England selectors pick the England team, I think I had better stay out of this one.” 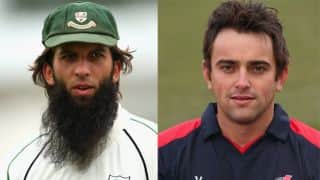