David Hussey was axed from the Victorian team last November

Australian all-rounder, David Hussey will play his 100th Shield match when Victoria takes on Tasmania at Blundstone Arena in Hobart on Saturday and will also captain the team in Matthew Wade’s absence.

Surprisingly  a year ago Hussey was axed from the Victorian team for the shield match last November, an experience he conceded “wasn’t easy”.

But Hussey was buoyant when talking about his achievement on Thursday according to reports from The Sydney Morning Herald.

Recalling his fond memories of playing with brother and star player Michael Hussey, David Hussey said, “He (Michael) has played a lot of Test cricket for Australia, and I play a lot of Sheffield Shield for Victoria, so it has worked out well for both of us.I haven’t had much time to sit back. I’ve been playing cricket non-stop since making my debut, so I still look back fondly to those early days in the backyard with Mike. We still talk about that now.”

The 37-year-old veteran batsman was the oldest when he made his debut for Victoria and always enjoyed  the companionship of his teammates and has grown accustomed to being told by younger players to “get a rinse” or “get a haircut”.

When asked about the number of seasons he felt he had in his kitty, David Hussey replied,“ Not many seasons left to go. There are too many young kids coming through. I’ve always said I would never stand in the way of a young kid who is going to play for Australia. So if that means this year I’ll be forced out, then so be it.”

“I still believe there is a spot for an older person on this game just to teach the younger kids how to bat for a longer period of time …  that’s the key”, he said. 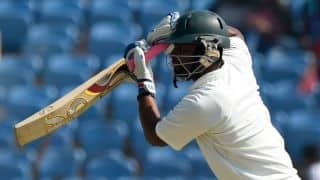 Ajinkya Rahane in a memorable partnership!