Lloyd put two teary-eyed laughter emojis to the news of Dhoni training with the Parachute Regiment of the Territorial Army.

Former skipper MS Dhoni‘s decision to opt out of India’s upcoming tour of the West Indies as he wishes to train with the Parachute Regiment of the Territorial Army might have seen former England cricketer turned commentator David Lloyd put two teary-eyed laughter emoticons to the news, but the Indian fans have not received it well.

Many pointed out Lloyd’s short international career compared to Dhoni’s and said that the 72-year-old broadcaster has no right to talk ill about the former Indian captain. “9 Tests & 8 ODIs Vs. 90 Tests & 350 ODIs…. This UK legend (!) is thick-skinned it seems…..” said one user.

“Is that a nervous laugh? U coward @BumbleCricket,” said a tweet while another fan said: “If you cannot respect what you should, you better stay away. Feel sorry for this person, so called England cricket legend doesn’t have a better job.”

“Sour grapes. He wasn’t on the commentator list this time. We’ve heard enough of his silly yourshire accent (sic.)”

“Bumble is apparently not humble, he is a jumble straight from the jungle..he won’t understand”

India’s tour of West Indies starts with a three-match T20I series on August 3. They will then play three ODIs and two Test matches. Chief selector MSK Prasad has made it clear that while the decision to retire rests with Dhoni, the selection panel is looking to groom young Rishabh Pant with an eye on the 2020 World T20.

But sources in the know of developments have revealed that the team management wants Dhoni to hang on till they groom Pant and not hang his boots yet. 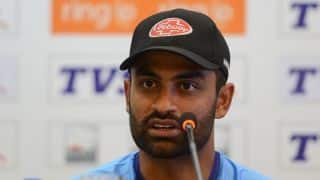