Currently, KXIP are 167 for the loss of six wickets in 18 overs with Akshar Patel on two.

Kings XI Punjab (KXIP) batsman, David Miller was dismissed for a healthy 54 by spinner, Deepak Hooda, after being caught by Stuart Binny at long on, during their chase against Rajasthan Royals (RR) in match 18 of the 2015 edition of the Indian Premier League (IPL) at the Sardar Patel Stadium in Motera, Ahmedabad on Tuesday. Currently, KXIP are 167 for the loss of six wickets in 18 overs with Akshar Patel on two and Mitchell Johnson coming in. Live updates: Rajasthan Royals vs Kings XI Punjab IPL 2015 Match 18

KXIP won the toss and elected to field first as RR finished on 191 for the loss of six wickets. With George Bailey injured, Virender Sehwag was named captain of the side. Rahul Tewatia was the replacement for Ankit Sharma. KXIP made as many as three changes, Shaun Marsh, David Miller, Shivam Sharma came in for George Bailey, Thisara Perara and Gurkeerat Singh Maan. Live Scorecard: Rajasthan Royals (RR) vs Kings XI Punjab (KXIP) IPL 2015 Match 18 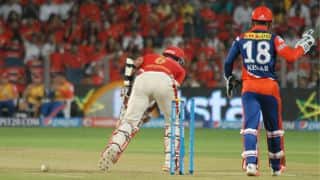