David Miller lost his wicket for 23 off 21 balls to Dhawal Kulkarni after edging out to third-man.

David Miller lost his wicket for 23 off 21 balls to Dhawal Kulkarni after edging out to third-man in attempt to up the ante against the Rajasthan Royals. Kings XI Punjab now find themselves in a very difficult position in their chase of 163. Miller was the fifth wicket to fall. Kings XI Punjab vs Rajasthan Royals Live Cricket Score IPL 2015: Match 3 at Pune

KXIP will, however, take heart from the fact that even RR were precariously placed at 75 for five in the first innings before James Faulkner and Deepak Hooda did a rescue operation. The Kings will now need Akshar Patel and George Bailey resurrect the ship for them. Bailey has the capability to still swing the pendulum in favour of his side. Live Cricket Updates: Kings XI Punjab vs Rajasthan Royals in IPL 2015

Earlier, the Royals scored 162 in their innings after a special performance with the bat from all-rounder James Faulkner, who scored 46 off 33 balls. KXIP, once had their opposition precariously placed at 75 for five but Faulkner along with Deepak Hooda, got RR back into the game. Anureet Singh starred with the ball for KXIP taking three wickets. 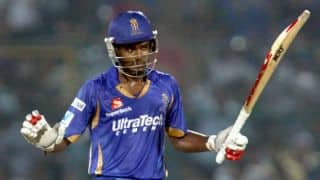 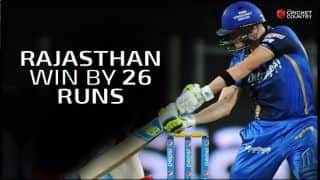