Promising England players such as Ben Stokes can use the ongoing one-dayers against Australia to press their Ashes squad claims, according to bowling coach David Saker. 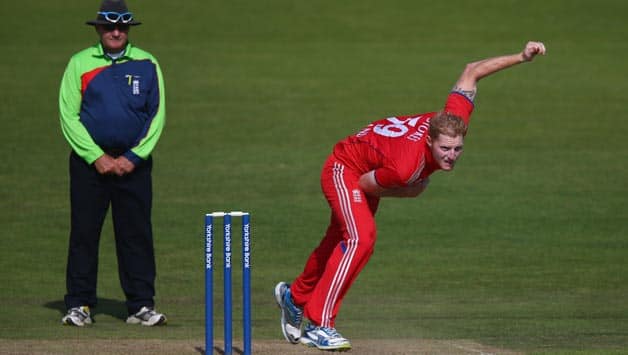 Promising England players such as Ben Stokes can use the ongoing one-dayers against Australia to press their Ashes squad claims, according to bowling coach David Saker.

Friday’s opener in Leeds may have been washed out but there are still four matches to go and while England are resting the core of the side that sealed a 3-0 Ashes win against Australia last month ahead of the return series ‘Down Under’ starting in November, places in the tour party are still up for grabs.

One of those pushing for a spot is Durham’s Ben Stokes, who at the age of 22 is in the process of becoming a genuine all-rounder. Stokes has already won 10 One-Day Internationals (ODI) caps, a tally he will look to increase come the second one-dayer against Australia at Manchester’s Old Trafford on Sunday, weather permitting.

But Stokes, New Zealand-born but educated in Cumbria, northern England, where his father Ged, a former Kiwi rugby league international, coached Workington, blotted his copybook when he was sent home early from a second string England Lions tour of Australia in February for persistent late-night drinking.

There are, though, very few genuine all-rounders — players worth a place for their batting or bowling alone — at international level.

However, Stokes has been doing his best to impress by scoring a hundred recently for Durham against County Championship title rivals Yorkshire, and taking 37 wickets in English domestic cricket’s first-class competition as well so far this season.

“I’m sure everyone will be looking at these games a little bit with that [Test] squad in mind,” said Saker, an Australian who was a fast-medium bowler at state level with Victoria and Tasmania before turning to coaching.

“You can’t always read a lot into white-ball cricket for red-ball cricket, but because there are some exciting players in our group, we’re going to have a good look at them.”

Stokes was once thought of as a batsman who bowled but Saker said that was no longer the case.

“His bowling has improved — there is no doubt about that — and we are searching for players who can play that multi-task role,” added Saker.

But he warned expectations of bowlers in one-day matches had to be altered given changes in fielding restrictions. “It’s a really tough ask now, with the limited fielders outside the circle, but he [Stokes] is good enough to do it. No matter how good a bowler you are, you will have days when it’s not easy because you are up against world-class batters.”

As for Stokes’s off-field transgressions in Australia with the Lions, Saker said: “With us, he does all the right things. He’s a good kid — he has that cheeky side to him, and that’s really good to have in a changing room.”

Meanwhile Saker said he enjoyed working with young players such as Stokes. “You can start coaching again, I suppose. With the Jimmys (James Anderson) and Stuarts (Stuart Broad), you’ve probably done all you can with them pretty much.”

“So to get new guys is exciting. It is about getting to know them for one, getting some trust that way, and then just passing on cricket knowledge more than techniques. I like to see how they think about the game and get to know how they think they can get wickets, how they work out batsmen, how they talk about things … find out what they are about.”