Warner and Doolan‘s stand of 205 runs for the second wicket helped Australia extend their lead.

David Warner and Alex Doolan’s stand of 205 runs for the second wicket helped Australia extend their overall lead to well beyond 400 runs  against South Africa on Day Three of the first Test at Centurion on Friday. Michael Clarke and Shaun Marsh were batting at the end of day’s play. Marsh was unbeaten on 44, while Clarke was unbeaten on 17.

The wicket at  the end of Day Three had flattened out considerably and South Africa were in trouble.

Earlier, Australia recovered very well from the early loss of Chris Rogers, as Warner and Doolan batted confidently to take their side march ahead.

While Warner took the attack to the opposition with a boundary in regular intervals, debutant Doolan did not allow the South Africans to get over him and break their partnership. The right-handed batsman had a positive approach in the middle, seeing off the deliveries that troubled him and punished the loose ones.

Warner was the more active partner as he scored runs at a brisk rate, but also had his fair share of luck. In the 11th over of Vernon Philander, Warner hit one high in the air towards the fine-leg. Dean Elgar, on the field in place of Dale Steyn, came in at the right time but failed to grab the ball.

In the next over, Ryan McLaren saw a thick edge that came off Warner’s bat was spilled by Alviro Petersen.

Warner was third time lucky in the 24th over when Graeme Smith failed to take hold of one much above his head, off McClaren.

For South Africa, AB de Villiers was unfortunate to have missed out on a century, as he fell for 91 off 148 balls to Johnson. His effort was the only bright spot for the South Africans in their reply to Australia’s 397.

Johnson claimed three out of four wickets that fell in the morning, as Nathan Lyon chipped in with the dismissal of Philander, who added 49 runs with de Villiers to help his side avoid follow-on.

South Africans resumed their innings at 140 for six but soon lost Robin Peterson as he failed to keep a delivery off Johnson aimed at the rib cage area, and Clarke did the rest. Peterson’s dismissal brought Philander at the crease; he added 49 runs for the eighth wicket. His stay at the crease was ended by Lyon, who trapped him in front of the wickets.

De Villiers batted with ease against the menacing pace of Johnson and against Peter Siddle and Ryan Harris. De Villiers slammed 10 boundaries and two sixes during his stay at the crease. 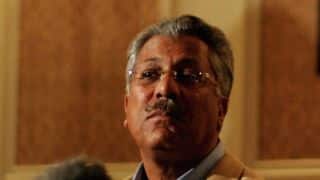