Warner slams century in each innings of tests against South Africa at Cape Town.

David Warner became the 15th Australian to score a century in each innings of a Rest match as he dominated South Africa in the third Test at Cape Town (March 2014). Warner had scored a 152-ball 135 in the first innings of the Test. He is also the 23rd opener to achieve such a feat.

Warner has been in sublime form since the Ashes at home. He was the top-scorer in the Ashes 2013-14 and he has scored three centuries in this series. Warner punished the South African quicks as Australia piled on 494 in the first innings. And after Australia decided against enforcing the follow-on, Warner got another opportunity to take apart the Proteas bowling.

Former captain Ricky Ponting has achieved the feat three times while Greg Chappell, Allan Border and Matthew Hayden have each achieved it on two occasions. The last three instances of such a feat being achieved by Australians have all been done against South Africa. 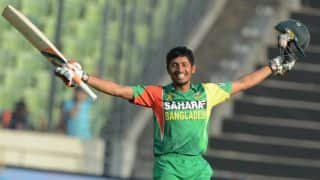