IPL 2021: With the SRH flag in his hand, Warner waved it as and when his side did something good. With the SRH flag in his hand, Warner waved it as and when his side did something good. But that must have been a sight that would have hurt SRH fans as they are used to seeing the left-hander smashing bowlers in the middle.

Also, the SRH opener made his first appearance in the stadium on Sunday after getting dropped from the playing XI after their encounter against the Punjab Kings on September 25.

Warner has been one of the most prolific run-getters for SRH over the years but has not been in good form this season and that led to his axing. Earlier in the year, Warner stepped down as captain of SRH after their poor run of form in the India leg. Despite the change of leadership, not a lot has changed for the team as they languish at the bottom of the table.

“I think if we got closer to the 150-mark, might have been par. We did have our chances to squeeze the scoring but it was always going to be tough with such a low score. We haven’t been able to identify the right score all season. We need to go back to the drawing board and re-assess things,” Williamson said at the post-match presentation after SRH slumped to their 10th defeat of the season. 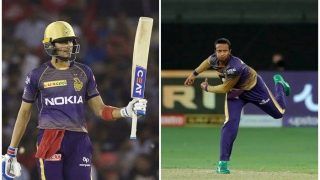