Steven Smith has been suffering knee and hip injuries.

Melbourne: Dashing opener David Warner may lead the Australian team in place of an injured Steven Smith during the upcoming limited-overs series against India starting January 12. Knee and hip niggles have been bothering Smith for sometime but he is a certainty as far as the upcoming Boxing Day or New Year Test against West Indies is concerned. But the the selectors and team medical staff may decide to rest him from portions of the five-match ODI series against India, according to a report by ESPN Cricinfo. The management are certainly taking no chances and want Smith to be fit and raring to go for the February tour of New Zealand and also the Twenty20 matches to be played in the lead-up to the World T20 in India in March. READ: David Warner feels Test format should not be changed

Smith’s absence from the opening rounds of the Big Bash League that is slated between now and Boxing Day is an indication that his knee needs proper care in the coming months. He has carried the problem since the latter part of the Ashes tour.

Coach and selector Darren Lehmann has conceded that furthur breaks for Smith would be discussed. “He keeps telling me he is 26 but [in Hobart] he was running as though he is 36. The pressure of captaincy is quite large. We have to look at that but we get a decent break now with two weeks off. He is not playing BBL so he gets a good break.

“The ODIs are important to us and then the T20 World Cup so I can’t see him getting a break until the end of the summer, unless we play really well or the niggles get worse.

I’m no medical expert but [rest] is what they are saying. They will say what he can or can’t do and if I disagree with it he plays and if I don’t he might not play,” Lehmann said. Australia will be hosting India in January, where they will play five ODIs and three T20 matches. 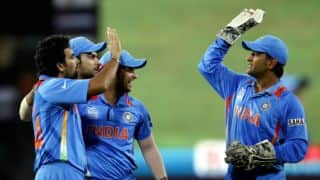