Sunrisers will now take on the losers of the Qualifier 1, Gujarat Lions in the all-important second qualifier on Friday.

New Delhi: Sunrisers Hyderabad captain David Warner has credited his bowlers and fielders for his side’s comfortable 22-run win over two-time champions Kolkata Knight Riders in the IPL Eliminator here. After posting 162 for eight, riding on Yuvraj Singh’s 30-ball 44, Sunrisers came up with a fine bowling performance and fielding effort to restrict KKR to 140 for eight last night, thereby progressing to IPL Qualifier 2 for the first time since making their debut in 2013. FULL CRICKET SCORECARD: Sunrisers Hyderabad vs Kolkata Knight Riders, IPL 2016 playoffs, Eliminator at Delhi

Sunrisers will now take on the losers of the Qualifier 1, Gujarat Lions in the all-important second qualifier tomorrow for their maiden entry into the summit clash of the T20 league.

“The bowlers have shown fantastic appetite. The experience of injured (Ashish) Nehra was a big miss for us. His experience is second to none. But the guys have stepped up. Barinder Sran has been bowling really well. He is still learning and big credit goes to Bhuvneswar Kumar because he has been helping him (Sran) a lot day in and day out. That’s the good thing about this team that everyone is willing to learn,” Warner said praising his pacers.

“The pleasing thing from my point of view is the way we fielded in the match. We were pretty sloppy throughout the tournament. But the guys came out and took some very good catches. I was very pleased with our ground fielding,” he said at the post-match press conference.

Warner though feels Sunrisers were some runs short after being put into bat by KKR. “I thought we were probably 10-15 runs short. Before the toss I was in two minds whether to bat or bowl. I always felt playing here in the past when you get good runs on the board and put pressure on the opposition it’s always hard to get going. That’s how we felt when we were batting,” he said.

Warner also praised young KKR spinner Kuldeep Yadav, who returned with figures of 3 for 35, to deny Sunrisers a big score.

“We talked about not losing in clumps. But I was really disappointed the way I got out. Yadav bowled well on the turning track. But it’s always hard for a young bowler to come and bowl to an experienced player like Yuvi. He is going to be a good spinner in the years to come definitely,” Warner said.

Asked about their next match against Gujarat Lions, the Australian said: “We know who their key players are. We know they have got very good firing power. Dwayne Smith has been playing very well. Their openers are going to come hard. For us it’s about starting well as a unit whether we bat or bowl first. We need to make sure that we execute our plans.”

“My job was to pick up wickets in the middle overs and I am happy that I could do that for the team. But it was challenging to bowl to Yuvraj Singh. He is a legend.” 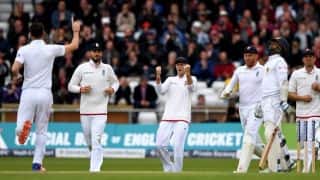