Umpires and other players had to intervene in the matter to stop the war of words.

Australian opener David Warner was fined 50 percent of his match fee when he was found guilty of breaching International Cricket Council (ICC) Code of Conduct during the second One-Day International (ODI) between India and Australia in the ongoing tri-series. The 28-year-old Australian cricketer had a verbal spat with Indian opener Rohit Sharma in the match at the Melbourne Cricket Ground (MCG) where Warner repeatedly mouthed the words ‘speak English’ at Rohit. Umpires and other players had to intervene in the matter to stop the war of words, Sydney Morning Herald reported.

‘We play hard aggressive cricket but we know what comes with it, sometimes you are going to get fined. We’ve just got to keep trying not to cross that line, because we’re all about playing cricket the right way,” Warner said.

Warner went on to defend his actions on the field of play. “When I went over to say something to him, he sort of said something in their language and I said ‘speak English’ because, if you’re going to say something, understand that theoretically I cannot speak Hindi,” Warner said on Sky Sports Radio on Monday. But finally the Aussie cricketer admitted his mistake.  “I was in the wrong … I shouldn’t have engaged him.”

Darren Lehmann, the Australian coach then said, “It’s not a great look. The ICC have done something about it. At the end of the day we have to work better at those situations and get better as a group. Davey said he’s been fined 50 per cent, so we’ll deal with that and move on. It’s not an ideal scenario, but we’ve got to make sure we’re playing the cricket we want to play without crossing the line. David’s an aggressive character and we support that. It’s just making sure he does the right things on the ground, and he knows that more than most. We’ll work with him with that,” 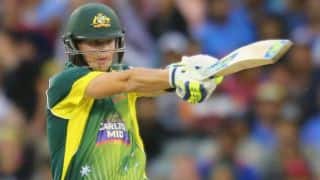