Australia opener David Warner scored a solid half-century to take Australia to 97 for two at Lunch on Day One of the first Test against Sri Lanka at the Bellerive Oval. 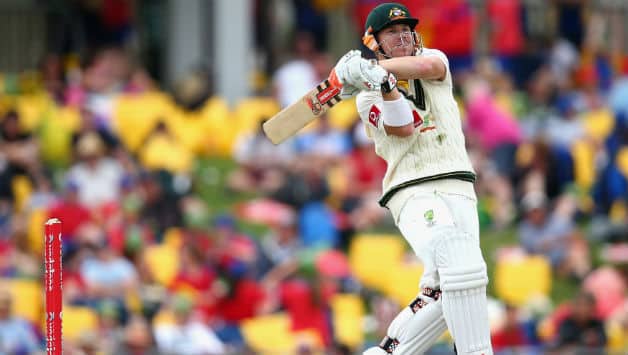 David Warner was run out in the final over before lunch to take some of the gloss of Australia‘s solid opening to the first Test against Sri Lanka at Hobart.

The Australians were sailing along without too many problems after winning the toss before Warner was out for 57 in a communication breakdown with Phil Hughes four balls before the break.

At lunch, Australia were 97 for two with recalled Hughes, batting at three, not out 27, with Shane Watson next in after the interval.

Up until Warner’s dismissal, the home side had few concerns despite losing the wicket of Ed Cowan on a greenish wicket which was beginning to play more evenly.

Warner, who carried his bat in his first of three Test centuries with an unbeaten 123 in last year’s Hobart loss to New Zealand, played part-time spinner Tillakaratne Dilshan towards short cover and started off for a single.

But Hughes was well down the pitch and Angelo Mathews had time to lob the ball towards the non-striker’s end with Warner stranded out of his crease.

Hughes looked comfortable early, cracking Shaminda Eranga for two classic boundaries with his first 16 runs coming off 14 balls before he dropped anchor and played a supporting role to Warner up to lunch.

Cowan was dropped in a difficult diving chance by Mathews at third slip on his first ball faced from Nuwan Kulasekara.

But he was out to a poor shot in the sixth over when he attempted to pull Chanaka Welegedara only to hand an easy catch to Eranga at mid-on for four and an early victory for Sri Lanka’s maligned pace attack.

It was the first Test for Australia since Ricky Ponting’s retirement after a record-equalling 168 Tests.

The former skipper was given a lap of honour around Bellerive Oval during the luncheon interval to give his home Tasmanian crowd an opportunity to pay tribute to his career.