David Warner regrets losing his cool on Twitter, but feels he had to defend himself

David Warner regrets losing his cool on Twitter, but feels he had to defend himself

Fined for his twitter tirade against a couple of journalists, Australian opener David Warner said he was "remorseful" of his comments but insisted that he had to defend himself after his image was used in a report lambasting the IPL due to the ongoing spot-fixing scandal. 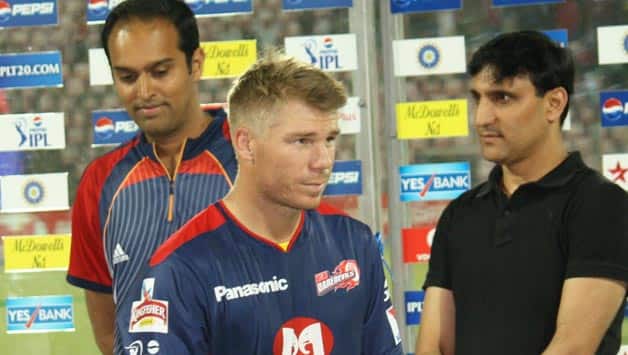 Australian opener David Warner said he regretted his comments on twitter but felt that he had to defend himself after his photo was used in a report lambasting the IPL due to the spot-fixing scandal. Warner was fined for his twitter tirade.

Warner, who turns up for the Delhi Daredevils in the IPL, was found guilty of breaching Cricket Australia’s code of behaviour and fined USD 5,600.

“Obviously it’s disappointing that guys are match-fixing. It’s not my place to say why they did do it or why they keep continuing to do it,” Warner told reporters in Sydney.

“But for me to have my image related to an article (detailing those issues)… it’s the worst thing that can possibly be brought to a cricket player.”

But the batsman admitted that despite being “extremely annoyed”, he could have handled the situation in a much better way.

“I’m extremely remorseful of the comments that I made and next time I’ve got to be a bit more professional with the choice of words I used,” he said.

“I think we (Australian cricketers) are a family in a way with the journos being a broader spectrum. We’ve got to try and keep the fighting in house and not let it go out house.

“If I went the right way about it and gave Robert (Craddock) a call, we wouldn’t be in this position today,” he added.

Warner will be leaving with the Australian team for England for the Champions Trophy starting June 6.