Warner had earlier sent a tweet describing Trott as 'weak' after the first Ashes 2013-14.

Australian opener David Warner, who was chastised for sending a derisory comment on England batsman Jonathan Trott after the first Test in Brisbane during Ashes 2013-14, hopes that Trott would overcome his stress-related issues.

Since the Brisbane Test, Trott withdrew from the England squad and has not returned to the squad since. The South African-born Trott, however returned to cricket last month for his county Warwickshire and looked in good nick during their run of games for the new season. After a recent game against Sussex, Trott yet again took a sabbatical from the game citing stress.

The outspoken Warner has since come out and apologized for his sound-byte but hinted at Australia continuing with their aggressive brand of cricket, he said “I probably went a little too far  in branding Trott weak. I hope he can get through this and get back on the park.If he does, we’ll keep playing the brand of cricket we do, with that aggressive, in-your-face attitude.”, Warner said in a BBC interview.

The England and Wales Cricket Board (ECB) has since promised to come out and enroll Trott in a support programme after the re-occurrence of his stress-illness.

Warner supported Trott’s decision to walk away, he said, “If you feel like you can’t give 100% and commit 100% then he’s done the right thing. What happened to him last year and what he said in his recent interview shows he’s got problems.”

When quizzed about what he said after the Brisbane Test, Warner explained that, “the way Trotty got out was pretty poor and weak. I’ve always been as honest as I can in the media and I’ll continue to do that.

“My comments were probably over the top at that time, when I didn’t know there was a problem with Trott.” 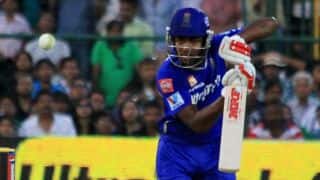