David Warner on Wednesday pulled up a surprise during a Bangladesh Premier League (BPL) match when he switched stance to bat right-handed against Chris Gayle.

David Warner on Wednesday pulled up a surprise during a Bangladesh Premier League (BPL) match when he switched stance to bat right-handed while facing Chris Gayle.

Warner, a left-handed batsman, was struggling to put away Gayle in the 19th over of Sylhet Sixers innings against Rangpur Riders. Having taken a double off the first delivery, Warner couldn’t score of the following two.

Unbelievable by Warner if it s not working with your left hand switch to your right!!! Shot Boi!!!!Video Credit : https://t.co/WE1KrAg5a3 #BPL19 #CricketPlayedLouder pic.twitter.com/sKUCP3YjSS

He then signalled to Gayle he was switching stance prompting the Jamaican to place his fielders accordingly. Warner was on 45 off 32 when he took the guard right-handed. He smacked the fourth delivery over the bowler’s head for a six, followed that with a sweep for a four and then reverse-swept the final delivery to collect another four. He finished the innings unbeaten on 61 off 35.

“MCC has reviewed the footage of David Warner switching to batting right-handed in the Bangladesh Premier League match yesterday and feels that his actions were within the Laws of Cricket,” Marylebone Cricket Club, guardians of the laws of cricket, told ESPNcricinfo.

“The Laws do not state that a batsman can bat only in one way and, from the footage seen, it seems clear that Warner made it obvious that he was changing to batting right-handed. The bowler, Chris Gayle, altered the field accordingly and everyone seemed to know what was happening.”

Warner is set to leave Bangladesh on January 21 with an elbow injury just days after his former Australia captain Steven Smith ended his campaign with a similar injury for which he successfully underwent surgery on Monday.

He will play two more matches for his franchise Sixers, for whom he has scored two fifties in five innings. 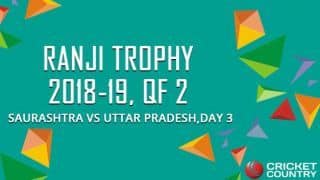