Both openers from the ongoing series vs Pakistan, Usman Khawaja and David Warner, will be preparing hard for the upcoming India tour.

David Warner has been rested for the upcoming Chappell-Hadlee Trophy 2017 against New Zealand in a quest to prepare for India tour. The centurion from the fourth ODI against Pakistan and Australia’s vice-captain, Warner, will be a key player in the forthcoming tour of India. Aaron Finch and Shaun Marsh have been recalled to Australia’s ODI squad for the clash versus New Zealand. Australia’s Test players in the ODI squad will depart for the India direct from New Zealand and selectors have decided to give Warner a break from white-ball cricket beforehand. Currently, Australia have already taken an unassailable lead in the five-match series against Pakistan by bagging the fourth ODI by 86 runs.

According to Cricket Australia, Usman Khawaja has also been prioritised for Test cricket and will head to Dubai early with Shaun Marsh filling in for him. It means Australia is likely to open the Chappell-Hadlee series with Finch and Shaun Marsh as the opening batters. The Chappell-Hadlee Trophy is currently held by the Australians after they whitewashed Kiwis in December 2016 in their own den. Interim national selector, Trevor Hohns, stated that Warner would link up with his Test-playing teammates at the team’s training camp to be held in Dubai. Australia thrash Pakistan by 86 runs in 4th ODI at SCG

“David has had a very big summer and will benefit from a break in cricket, both mentally and physically. He will travel to Dubai in the second group of departures to coincide with those players arriving from the ODI series in New Zealand. This gives Aaron an opportunity to return to the side. His form in the Big Bash League 2016-17 (BBL) has been very good and he has earned his recall”, Hohns added. 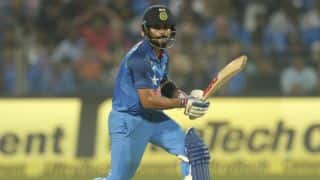