David Warner walked off the field while batting during a club cricket match to defuse a situation that could have turn uglier, his wife has claimed.

David Warner walked off the field while batting during a club cricket match to defuse a situation that could have turn uglier after ‘very hurtful’ comment directed at him, his wife has claimed.

Warner is currently serving a 12-month ban from first-class, international and Big Bash League for his role in the Newlands ball-tampering scandal earlier this year.

While batting for Randwick-Petersham during a Sydney Grade Cricket match on Saturday, Warner walked off the field midway through his innings but returned after a short break and went on to score 157.

“He left the field because first of all he didn’t like what he was hearing and where that could have been taken,” Candice Warner told Sports Sunday. “It was hurtful, it was very hurtful. Everyone has their own opinion but there is a difference between sledging and abuse.”

The comments came from Jason Hughes, older brother of late cricket Phil Hughes, a teammate of Warner. As per reports, the comments were made in reference to Phil who died after being hit on the head by a bouncer during a Sheffield Shield match in 2014.

While refusing to reveal the exact comments, Candice said the comments were ‘a little bit too far’. “I’m not going to go into the details but David was taken aback by the comments and thought they went a little bit too far, so he decided to remove himself from the game. It s just a shame that this is taking from his great knock yesterday, he got 157 and he got a century a few rounds ago and he s really enjoying playing for Randwick, she said.

When questioned if the comments were abusive, she replied, I personally would put it into that category but I’m talking for myself.

On the other hand, Western Suburbs, the opponents in Saturday’s fixture, said there was just a brief exchange between the two players and no abusive sledging was involved. “There was no barrage of sledges aimed at David Warner by any WSDCC player. There was a brief exchange between Jason Hughes and David Warner. This exchange had nothing to do with Phil Hughes. This exchange was not vicious or abusive as alleged in some sections of the media,” Western Suburbs said in a statement on Sunday. 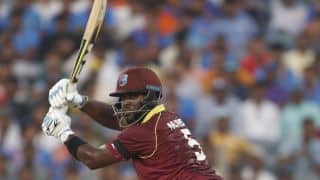