It was a conversation with Voges, who did not makes his Test debut until he was 35, which helped persuade Malan, who turns 30 in September, that he would get a chance to play international cricket.

England s latest batting star Dawid Malan, who almost single-handedly won them the third and final Twenty20 International (T20I) as well as the series against South Africa, has said that he seeks inspiration from Australia’s Adam Voges, who gave him the hope of making an international debut he thought would never come. Malan marked his first senior England appearance with a superb 78 off just 44 balls in a 19-run victory over South Africa in Cardiff on Sunday that sealed a 2-1 series win for them. It was the highest score made by an England T20I debutant. The fact that Malan s Middlesex teammate Eoin Morgan was captaining him on his debut helped him.

But it was a conversation with another Middlesex batsman in Voges, who did not makes his Test debut until he was 35, which helped persuade Malan, who turns 30 in September, that he would get a chance to play international cricket. “I didn’t think this day would come,” Malan said after a Man-of-the-Match display at Cardiff’s Sophia Gardens.

“I actually had a chat about two-and-a-half months ago with Adam after the North v South (domestic) games which I contributed really well to. Then they (England) rested a few players for the Ireland matches. I spoke to Adam and said ‘Look, I don’t know what else I can do. I can only score so many runs in the games that I’m given’. He gave me a few tips as he was in the same position with regards to Test cricket in Australia.

“He was a late bloomer so he told me what he did. Fortunately I was given another chance and I took it,” added Malan, who on Sunday struck 12 fours and two sixes the first off just his second ball in senior international cricket.

“You probably have your best years from 28 to 32 as a batsman,” explained Malan. “You start knowing your game, what your strengths and weaknesses are. So hopefully my best years are still ahead of me and I can get a few more opportunities to push for a regular place,” said Malan, who stressed that playing Test cricket was “still my ambition”.

Born in the London suburb of Roehampton, Malan’s debut was all the more special for being made against the country where he grew up. Malan’s senior cricket career started with Boland, a South African provincial side, before he joined Lord’s-based Middlesex in 2006.

“I know that country very well and it means a hell of a lot to me,” Malan said of South Africa. “It’s given me my years at school and made me the guy that I am. So to be able to make my debut against them and contribute to England, the country I was born in and have lived in almost all of my life, is a fantastic experience.”

Malan’s England debut saw him join the ranks of cricketers who’ve learnt their game in South Africa only to pursue international careers elsewhere, with the Proteas losing a dramatic 2015 World Cup semi-final to New Zealand when Johannesburg-born Grant Elliott hit a six off Dale Steyn with just a ball to spare at Auckland’s Eden Park.

South Africa captain AB de Villiers said he hoped the launch of the country’s new domestic Twenty20 Global League would help stop the talent drain, although he did not regard Malan as ‘one that got away’.

“He played a fantastic knock,” said de Villiers, himself one of the world’s leading batsmen. “He’s been in England for so many years, he was never going to play for South Africa. De Villiers added: “The T20 League starting in November, that’s definitely going to make a huge difference. It’s going to be unbelievable, some of the youngsters in South Africa will get an opportunity to play in the same side as guys like (Chris) Gayle, (Dwayne) Bravo, (Kieron) Pollard and so many others Morgan is coming. A great group of talent is coming. It’s going to do amazing things for South African cricket.” 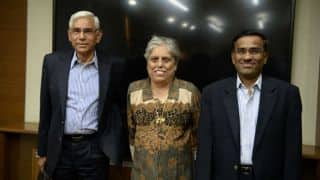