New Zealand players got the taste of their own medicine when Mumbai batsmen hammered their bowlers for fours and sixes all over the ground. At one point it seemed like Kiwi bowlers were not even trying too hard to take wickets, trying to roll up a few tricks under their sleeve for the first Test to be played at Kanpur on September 22. Day two saw a full 90-over game and 402 runs being scored till umpire’s called it a day. It was satisfying to watch Mumbai batsmen timing the ball to perfection and giving the visitors a run for their money. Second day’s play saw two centurions— Suryakumar Yadav and Kaustubh Pawar. However, their batting approach was completely different. Pawar was batting cautiously whereas Yadav went on for a brutal onslaught scoring at a strike-rate of 120 (approximately).

However, the main highlight of the day was Rohit Sharma coming out to bat. All eyes were on the Hitman of India cricket who needed to put his claim forward to get selected in the team for the Kanpur Test. But, Sharma could not live up to the expectations of fans coming to watch him change the game in a single session as suggested by Indian skipper Virat Kohli. Sharma was lured into stepping down the track to hit Sodhi but got outsmarted as he was stumped by wicketkeeper BJ Watling. Everyone was thought when Armaan Jaffer came out to bat that the ‘best is yet to come’ but it did not go that way.

Sharma came into bat when Jaffer got out in Sodhi’s second over of the innings. He too got out in similar fashion trying to hit him by dancing down the wicket, instead he was stumped by substitute wicketkeeper Luke Ronchi. Yadav joined him in the middle, he got dropped by Sodhi early on when the ball went up in the air inside the 30 yard circle. Yadav decided to make full use of the opportunity putting up a show for the crowd who came to the stadium to see Sharma’s hitting maximums. Yadav dealt in boundaries and scored 84 runs split between 8 sixes and 9 fours. Yadav’s hit was also responsible for a ball being not found when he struck the ball over mid-wicket boundary.

Pawar retired after scoring his century. He held onto one end and let other batsmen attack. However, he did take a slightly attacking approach watching Yadav hit maximum at the other end. Sodhi’s happiness lasted only in the first session as he got picked up for far too many runs in the rest of the sessions.

After Yadav got out to Santner as straight-on substitute fielder Ronchi took his catch, skipper Aditya Tare and Siddhesh Lad took guard at the crease. Lad played an unreal innings, he struck 7 humongous sixes and 7 fours in his 62-ball-86. He scored at a strike rate over 138. Tare started off cautiously but soon came into the groove. He too scored a half-century. He faced 76 balls and scored 53 runs from it. It was a run-fest if Day Two’s play is to be concluded. However, not giving Trent Boult and Neil Wagner the new ball in the last session seemed a little abrupt. Wagner created problems for Pawar trying to bowl him short balls, keeping him guessing. Even Boult bowled bouncers through his spell. 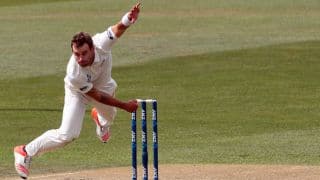