Shane Warne continued to baffle most with his unfathomable captaincy as the Royals failed to win their fourth game in a row at the PCA in Mohali. Chasing 196 for a win, Rajasthan Royals were restricted to 147, allowing the Kings XI Punjab their third successive victory. 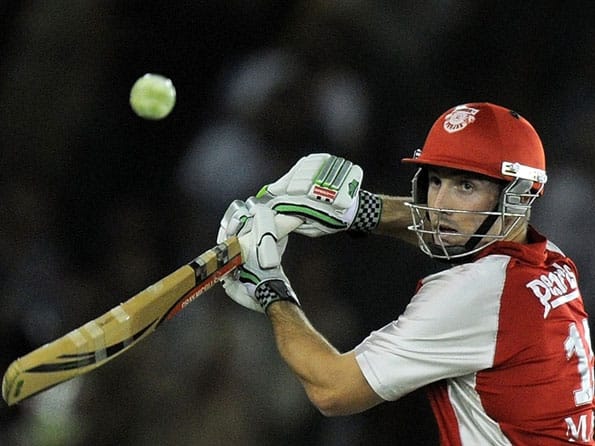 Punjab notched up their third straight win at Mohali

Shane Warne continued to baffle most with his unfathomable captaincy as the Royals failed to win their fourth game in a row at the PCA in Mohali. Chasing 196 for a win, Rajasthan Royals were restricted to 147, allowing the Kings XI Punjab their third successive victory.

With the target so steep, Watson was pushed down to the number three as the Royals opened with Swapnil Asnodkar and Rahul Dravid. Dravid hit a couple of crisp boundaries but was bowled after he gave himself too much room off the bowling of Ryan Harris.

At the other end, Asnodkar scored nine off as many balls before being sent back to another full-length ball from Praveen Kumar.

Watson showed glimpses of his good form from before the IPL with three boundaries from a Harris over. However, the climbing run-rate meant that Watson had to continue to go for his shots and one such stroke saw his demise in the seventh over. It was a short ball that was much slower than expected and Watson top-edged it to the fielder.

It was a shrewd bit of captaincy from Adam Gilchrist as he had allowed Praveen Kumar a four-over spell, in which he ended up conceding only 22 for his couple of wickets.

Ross Taylor, sent at five, lasted five balls before playing back to a Piyush Chawla googly and the umpire deemed him to be out lbw.

With four wickets down for 49, the target seemed much farther than it had first looked. There was a 50-run stand for the fifth wicket between Stuart Binny and Ashok Menaria but the required rate kept ticking over to unapproachable levels.

Binny s knock of 30 was ended by Ryan McLaren, caught at long-on while Menaria was sent back by Bhargav Bhatt, signalling the end of the Rajasthan Royals resistance. They fell 48 runs short in the end.

The Kings XI Punjab were earlier helped by some sloppy fielding from the Rajasthan Royals, propped by a start that Paul Valthaty has become famous for in this IPL and pushed towards the 200-run mark by Shaun Marsh s 42-ball 71.

After a bizarre first two overs of the game when both Adam Gilchrist and Valthaty were both dismissed off no-balls, Kings XI Punjab went on to score 73 in the first five overs of the game. Rajasthan would have been least expecting this outburst from the openers that included the quickest ever fifty in IPL history.

Shane Warne also conceded a six and a four in his very first over and despite the wicket of Gilchrist, the run-rate did not dip too drastically even after the Powerplay overs.

Valthaty scored 46 that included a couple of lives but more importantly, he also snapped the Orange Cap from Tendulkar when he got to 31.

Marsh was delightful in his shot-making, mixing the orthodox with the aggressive with panache. He rounded it off with three sixes off Warne and the side was on its way to more than 200.

There was a cluster of wickets towards the end of the innings, which prevented Kings XI Punjab from providing the finishing touches to the total. They managed only 26 in the last five overs but the target of 195 proved to be more than enough for the Royals.

Punjab made one change, Bhargav Bhatt coming in place of Vikramjeet Malik, while Asnodkar, Dravid, Dishant Yagnik and Binny played for Royals.

Man of the Match: Shaun Marsh