A look at the passages of play Delhi Capitals and Royal Challengers Bangalore from their IPL 2019 clash at Feroz Shah Kotla on Sunday.

A cursory glance at the scores put up by various teams at Kotla this season is enough to give an idea of how difficult the pitch is for stroke-making. So when DC openers Prithvi Shaw and Shikhar Dhawan led a blazing start, it was a pleasant surprise. The duo struck fours at will, creaming 30 off the first three overs. Though Shaw fell inside the Powerplay overs, that didn’t set the hosts back. Poor deliveries were punished with Dhawan taking the lead in company of his captain Shreyas Iyer. DC had scored 59/1 before the fielding restrictions were lifted. A slowdown did occur, but it was manageable. Dhawan was out right after hitting a third straight fifty. Iyer took charge soon with two sixes off Yuzvendra Chahal the second of which took him to his half-century. The duo had set the base with a 68-run partnership for the second wicket.

After Dhawan’s departure in the 13th over, RCB managed to pull things back with quick blows. From 103/1 at one stage, DC slipped to 129/4 by the time they were in the death-overs zone. With four overs remaining and 131 runs on the board, they were progressing towards a middling total at best. Before Colin Ingram pressed on the accelerator with a four and six off consecutive deliveries from Navdeep Saini. The maximum damage was inflicted in the final two overs though with the left-handed duo of Sherfane Rutherford ransacking 36 runs from the final two overs. Axar remained unbeaten on 16 off 9 while Rutherford struck 13-ball 28* as DC posted 187/5 the highest total at the venue this IPL season.

That late blitz from Rutherford meant that RCB ended up chasing 15-20 runs more than what could have been anideal target. However, following the C blueprint, RCB openers also had a brisk start with Parthiv Patel going all ends out for some quick runs and he clobbered 39 off just 20 ball, striking the ball at 195.00 with the help of seven fours and one six. Virat Kohli, at the other ned, did not get to face many balls,but Parthiv ensured that his team had sped to 56/0 in just five overs. He made use of the limited pace and bounce on offer on the Kotla track, failed to survive the powerplay overs

Kohli, de Villiers get out to poor deliveries, then collapse

This was something Kohli admitted in the post match presentation that both AB de Villiers and himself got out to shots that they should not have. After Parthiv’s blitz the stage seemed set for RCB superstars to drive the chase forward but Kohli, batting on 23 off 17 balls, decided to take on Axar Patel in his first over and to be fair to him, he picked a half-tracker, only to send the ball straight down to deep midwicket where Rutherford took a neat catch. three overs later, de Villiers, again well set on 17, took on Rutherford, and again a fair delivery to go for an expansive shot – it was short outside off and at military medium, by the South African failed to get the elevation and was taken well by Axar in the deep. RCB then found themselves in the quicksand of Kotla as new batsman failed to adjust to the pace or the lack of it of the track and from 103/1, slumped to 111/5. 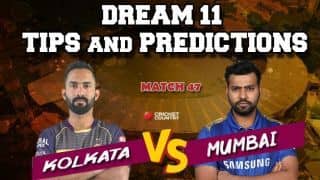 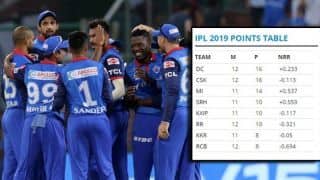