Leg-spinner Rashid Khan of Afghanistan was the star performer for SRH as he bagged three wickets for 14 runs in four overs, for which he was adjudged the Player of the Match.

Opener Jonny Bairstow’s sublime fifty was complemented by a stellar bowling effort from Rashid Khan as Sunrisers Hyderabad outplayed Delhi Capitals by 15 runs to open their account in the 13th edition of Indian Premier League on Tuesday. Put in to bat, Bairstow – 53 off 48 – scored his second fifty of the tournament, while David Warner – 45 off 33 balls – and Kane Williamson – 41 off 26 balls – also came up with valuable contributions, helping Sunrisers Hyderabad post a competitive 162 for four. SCORECARD

Defending the total, leg-spinner Rashid returned with three crucial wickets, while Bhuvneshwar Kumar – 2/25 – scalped two and T Natarajan and Khaleel Ahmed claimed too chipped in to restrict Delhi to 147 for 7 in 2 for a deserving win. MATCH HIGHLIGHTS

Delhi lost opener Prithvi Shaw early in their chase but Shikhar Dhawan – 34 off 31 balls – and skipper Shreyas Iyer took them to 34 for one in the first six overs. Rashid got into the act straightaway, dismissing Iyer with his second ball and then returned to remove Dhawan with a wrong’un in the 12th over as DC slipped to 63 for three.

Rishabh Pant then smashed two sixes on both sides of the wicket in the 13th over to ease the pressure. Shimron Hetmyer also joined the party, launching Khaleel Ahmed for successive sixes in the 15th over.

However, Bhuvneshwar came back to dismiss Hetmyer, before Pant became the third victim of Rashid. Needing 59 runs from 30 balls, all eyes were on Marcus Stoinis but he was done in by a well-placed yorker from Natarajan to end Delhi’s hopes.

Earlier, Bairstow smashed two fours and one six in his innings and shared two crucial partnerships — 77 off 57 balls with Warner for the opening stand and 52 off 38 balls with Williamson for the third wicket.

Making his IPL debut, Jammu and Kashmir’s Abdul Samad (12 off 7) blasted a four and six in his useful cameo. Warner and Bairstow were circumspect with the pace trio of Ishant Sharma, Kagiso Rabada (2/21) and Anrich Nortje maintaining their line and length.

The result was Sunrisers could only score 38 in the powerplay, which yielded just two fours and a six — all hit by Warner.

Bairstow picked his first boundary in the seventh over, launching a slog sweep for a six off leg-spinner Amit Mishra (2/35).

The duo tried to make up for the lack of boundaries on the slow track with their excellent running between the wickets to keep the scoreboard ticking.

Warner sent one straight over Ishant’s head for his second six and then picked a four off Mishra with a reverse sweep but the spinner had the last laugh as he had him caught behind with SRH reaching 82 for one in 10 overs.

Mishra returned to dismiss Manish Pandey (3) before Sunrisers crossed the 100-mark in 14th over. Playing his first match of the season after recovering from an injury, Williamson smashed two fours in the 16th over to take SRH to 128 for two.

Bairstow reached his fifty off 44 balls before holding out to Nortje in the 18th over. Williamson too was dismissed in the last over. 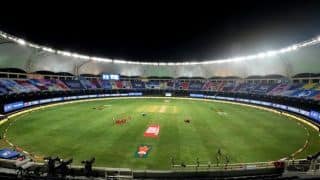