Madan Lal, who is being backed by acting BCCI president CK Khanna's supporters has been accused of Conflict of Interest by the rival group as he runs a cricket academy at Siri Fort ground.

In case of Tihara, a very influential member of the erstwhile Sports Committee, the accusation is that he has completed 15 years and hence can’t contest the election as per Lodha Committee recommendations (9 years). Tihara in his defence said: “Sports Committee is a sub-committee with no executive powers. We can only recommend and not decide. How come that will be held against my candidature. This allegation has been raised by one Pramod Jain and I will be submitting my reply before scrutiny tomorrow.”

Lal, who is being backed by acting BCCI president CK Khanna’s supporters has been accused of Conflict of Interest by the rival group as he runs a cricket academy at Siri Fort ground.

Lal needs to file his reply before the final scrutiny and he is confident that his nomination form is in order. “I will be filing my reply tomorrow and this is a baseless allegation. Yes, I run an academy but if you go by Articles of Association, I will have 15 days time after elections to sever ties with the academy. I am filing my reply. If I win elections, I will not be a part of any academy,” Lal told PTI today.

Shashi Khanna, wife of acting BCCI  president CK Khanna, whose candidature has raised maximum eyebrows, has been accused of violating Clause 60 (v) of Articles of Association. Clause 60 (v) speaks about Position of Influence. “When an individual occupies a post that calls for decision of grievance, management or selection to be made, and where a friend, relative or close affiliate is in the zone of consideration or subject to such decision making, control or management. Also when the individual holds any stake, voting rights or power to influence the decision of franchise/club/team participated in the commercial leagues of DDCA.”

The accusation against Mrs Khanna is that her family runs Chand Khanna Club that plays in the DDCA league. On behalf of Mrs Khanna, her lawyer Nikki Kantewala said: “First and foremost, Shashi Khanna has no stakes and involvement with Chand Khanna Club. Also the Conflict of Interest issue is strictly regarding involvement in IPL franchises. So the question doesn’t arise. As far as Mr Khanna being BCCI acting president, he was appointed as per Supreme Court diktat. Also BCCI doesn’t interfere in internal governance of the state association. So allegations of violation of Article 60 (v) doesn’t hold much ground.” 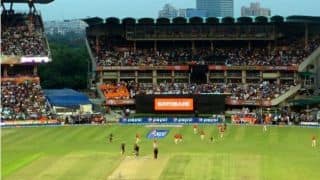