Earlier on March 6, a three-member tribunal was formed by the PCB to investigate the spot-fixing case allegedly involving Sharjeel and Khalid Latif.

Karachi: Suspended Pakistan batsman Sharjeel Khan‘s lawyer has revealed that Islamabad United’s coach Dean Jones and former Test cricketers Mohammad Yousuf and Sadiq Mohammad will be presented as `expert witnesses` on May 24 in front of the Anti-Corruption Tribunal probing the Pakistan Super League (PSL) spot-fixing scandal. On the third day of the day-to-day hearing on Thursday, Sharjeel’s lawyer Shaigan Ijaz accused the Pakistan Cricket Board (PCB) for making up a story and trying to back it up with witnesses.

“PCB made up a story and is trying to back it up with witnesses. Board is being lenient with some players, while it is acting strictly against others,” the Express Tribune quoted Shaigan as saying. Meanwhile, PCB’s attorney Tafazzul Rizvi said that Sharjeel’s lawyer has full right to disagree with their witnesses, adding that the truth would reveal once the decision comes out. The Shaharyar Khan-led board presented International Cricket Council’s (ICC) Anti-corruption Unit chief Ronnie Flanagan as witness who clarified that the world’s cricket governing body has nothing to do with the case.

“This is PCB’s case to deal with. The case is being heard professionally and it shows that PCB wants to eliminate corruption from the game of cricket,” Flanagan said. On Wednesday, Sharjeel ‘s counsel said that his client had timely informed the relevant authority of the PCB about his meeting with a bookie.

Earlier on March 6, a three-member tribunal was formed by the PCB to investigate the spot-fixing case allegedly involving Sharjeel and Khalid Latif. The duo was suspended by the PCB under its Anti-Corruption Code, as part of an ongoing investigation into an international syndicate which was believed to corrupt the second edition of the PSL.

Both the cricketers, who play for Islamabad United franchise in the PSL, formally recorded their statements on February 18 before the anti-corruption unit of the cricket board. The British Police have arrested three suspects in connection with the case including Nasir Jamshed, who was released on bail. 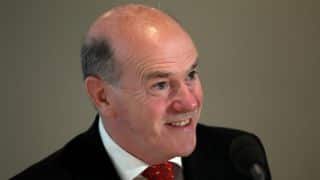 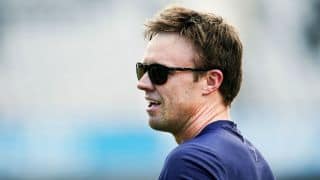