West Indies Women batsman Deandra Dottin scored an unbeaten 63, as the Windies finished on 153/7 wickets vs India Women in the 2nd ODI at Mulapadu.

West Indies Women batsman Deandra Dottin scored a crucial and unbeaten 63, as the Windies finished on an average total of 153 for the loss of seven wickets vs India Women in the second of the three-match One-Day International (ODI) series, at the Dr. Gokaraju Liala Gangaaraju ACA Cricket Ground in Mulapadu on Sunday. Apart from Dottin, no other batsman could go past the 25-run mark, while for India, it was Jhulan Goswami and Ekta Bisht, who claimed a couple of wickets each for 28 runs, while most of the Indian bowlers contributed, as the Indies Women once again slumped to a sloppy start. LIVE Cricket Updates, IND vs WI , 2nd (Women’s) ODI at Mulapadu

Earlier, Indian Women skipper Mithali Raj won the coin toss and elected to bat first, as both the teams went in with a balanced side. However, the Windies Women were off to a poor start, as they lost the opening wicket in the form of Hayley Matthews, who fell for mere six to fast bowler Goswami, after being trapped leg-before in the fifth over, with just 16 runs on the board. She was quickly followed by her fellow opener in the form of Shaquana Quintyne, who fell for mere nine to Shikha Pandey, in a similar fashion, in the sixth over, with just four runs added to the total.

The Winides skipper, in the form of, Stafanie Taylor came in to bat, along with Kycia Knight, in hopes of giving Windies a much needed boost, following the sloppy start. However, it was at the score of 45, when the skipper departed for just 15, after falling prey to Bisht, who bowled her up in the 18th over. Just 13 runs later, it was Knight, who too fell for the same total to Goswami, while only this time, she was unfortunately involved in a run out in the 16th over.

The Indian bowlers seemed to be in complete control, as the continued to pile pressure on the Windies batsmen with some real good and tight bowling. However, it was followed by a good 70-runs stand for the fifth wicket between Dottin and Merissa Aguilleira. It was not until the 45th over, when Aguilleira fell for 25 to Bisht, who bowled her up again. She was quickly followed by the wicket of Shemaine Campbella, at the score of 139, who fell for mere five to Rajeshwari, after being caught by Bisht, in the 48th over.

The final wicket of the innings fell in the form of Deandra Dottin, in the final over, when she was bowled up by Goswami for 63, as she played good enough o score her half-century, and steer the Windies women past the 150-run mark, and put up an average total of 153 on the board, with possible something that the Windies can fight for to defend, and possibly win it as well to level terms in the series. 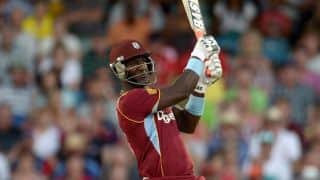