The England and Wales Cricket Board will not consider Stokes for selection until the ongoing police investigation is completed.

With Ben Stokes investigation moving ahead in England to a more judicial route, his teammates gear up to take on Australia in the second Test at Adelaide. Speaking ahead of first-ever day-night Ashes Test, Angus Fraser has termed the Stokes investigation as more important than The Ashes 2017-18.

Fraser, who is also a member of England s selection panel, maintained that the outcome of the investigation could define future of the game. According to Espncricinfo, Fraser said: “I think the most important thing is that the matter is dealt with correctly. We can all look at an Ashes series as extremely important, but the future health of the game is very important, too. The decisions that have to be made need to be the right ones not just for now but the for the game moving forward, too.”

Meanwhile, Ben Stokes signed with New Zealand provincial side Canterbury on Thursday. The 26-year-old inked a deal just a day after arriving in the country for a trip English cricket officials initially said was simply a family visit.

He further adds, The news this week, I wouldn’t say it’s taken everyone by surprise. But people are coming to terms with what’s happening and are prepared for every eventuality: the police investigation and the results of the police action. Then it moves onto the ECB. I suppose the fact is, when everything falls into line, then Ben is in a position to be able to play cricket, whether it’s in the Ashes or the one-day series that follows.”

“You want to know the full story before you react. That’s where the ECB are at: everybody wants to know what exactly went on. We’ve seen the footage, we’ve heard reports. But until we know what exactly has taken place, it’s hard to make those sorts of comments. Once we know all the information, I’ll be happy to give my feelings on it.” 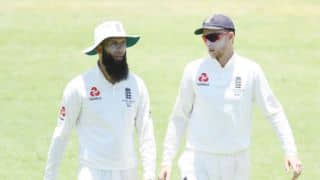