Deepak Chahar, who played with MS Dhoni in Rising Pune Supergiant, goes into IPL auction 2018 with a base price of INR 20 lakhs.

Fresh from a stupendous show in domestic T20, Rajasthan medium pacer Deepak Chahar is now hoping to reunite with MS Dhoni in the upcoming Indian Premier League. The 25-year-old has a reserve price of INR 20 lakh and his name will go under hammer at the IPL auction this weekend. He was part of the Rising Pune Supergiant (RSP) — the franchise captained by Dhoni — last year.

Dhoni would be leading Chennai Super Kings this season. He grabbed 12 wickets from four matches that included a career best 5 for 15 in the Super League stage to take Rajasthan to their maiden final appearance in the Syed Mushtaq Ali Trophy.

Having shared the dressing room with Dhoni, Chahar is eager to play with the Indian great. “It was a great learning experience from Dhoni. I not only shared the dressing room but his room as well — as anyone could walk in to his room which remained open 24 hours. He takes utmost care of the juniors, doesn’t hesitate to join us on dinner table. It helps the juniors so that they don’t develop a complex. I will look to play with him again,” Chahar said after their match against Punjab at Eden Gardens. He’s aware his performance in the tournament would be watched by the IPL franchises. It will definitely help. Franchises keep a close watch on the Mushtaq Ali as it’s the same format,” Chahar who claimed seven wickets from five matches in the inter-state zonal round said.

“Obviously you will put in that extra effort knowing that it’s a day before the auction.” Chahar returned with figures of 2 for 9 before limping off the field with a niggle. Punjab won the match by five runs but could not make the final after finishing second to Rajasthan on net run-rate.

Rajasthan will clash against a star-studded Delhi in the final at Eden Gardens tomorrow and Chahar is aware of the significance of the match. Delhi wicketkeeper batsman Rishabh Pant who has been retained by Delhi Daredevils said, “I’m very excited. I’m already retained so I don’t have to think about the auction. My main aim is to keep performing and do well in every match.” 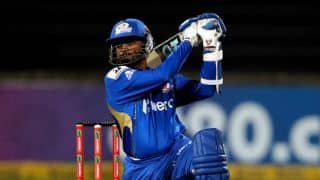 Harbhajan Singh: Whichever franchise picks me, I will look forward to win IPL 2018 with them