All four bowlers are currently playing for different teams in the IPL. Saini has impressed while playing for the RCB and so has Deepak Chahar, who has taken 10 wickets in the competition so far.

Pacers Khaleel Ahmed, Avesh Khan, Deepak Chahar and Navdeep Saini will be the net bowlers helping the Indian cricket team during the World Cup in England, the BCCI announced on Monday.

“The players will assist the Indian team in its World Cup preparation,” said the BCCI in a statement hours after announcing the 15-member squad for the mega event beginning May 30.

All four bowlers are currently playing for different teams in the IPL. Saini has impressed while playing for the RCB and so has Deepak Chahar, who has taken 10 wickets in the competition so far.

Khan and Ahmed can too generate decent pace and their services will come in handy during the Indian team’s net sessions in England. However, they both have not had much to do in the IPL, having played just one game each for Delhi Capitals and Sunrisers Hyderabad respectively.

Earlier in the day, Dinesh Karthik, Ravindra Jadeja and KL Rahul won the BCCI selection committee s vote of faith after being named in India s squad for the 2019 ICC Cricket World Cup.

Ambati Rayudu and Rishabh Pant were discarded from the ODI squad, while Hardik Pandya returned after recovering from injury.

MSK Prasad, the chairman of selectors, said that Karthik who was dropped in March was preferred over Pant for his experience and that Jadeja was picked for his all-round skills as the World Cup continues, with the selection panel feeling that his left-arm spin could prove handy as the surfaces get slower.

May 28: (warm-up) India vs Bangladesh, Cardiff

June 9: India vs Australia, The Oval 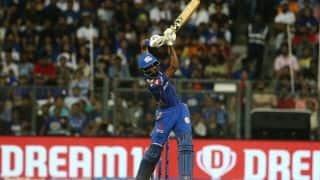