Deepak Chahar burst in the scene in 2010 with debut figures of eight for 10 in a Ranji Trophy fixture that saw Rajasthan bundle out Hyderabad for 21 - the lowest Ranji total ever.

Deepak Chahar burst in to the scene in 2010 in his debut match with figures of eight for 10 in a Ranji Trophy fixture that saw Rajasthan bundle out Hyderabad for 21 – the lowest Ranji total ever.

The feat became even more remarkable when it was known that the fast bowler was rejected by Greg Chappell when the Australian was heading the Rajasthan Cricket Association academy in 2008.

Eight years down the line, Chahar has failed to live up to his initial hype, majorly because of a spate of injuries, but seem to be on the right track with credible performances at the domestic level and the Indian Premier League leading to an international appearance in T20I earlier this year.

Talking to Sportstar, the 25-year-old recalled how a chance meeting with the great Sachin Tendulkar changed his attitude towards cricket.

When I started playing cricket, Sachin Tendulkar was someone we looked up to. Just like every other young cricketer, I also took up the game seriously only after watching Sachin paaji. And even today, he remains my inspiration, revealed Chahar, who made his T20I debut against England at Bristol in July.

I had the chance of meeting Sachin paaji when I was 13 years old. He had come for a game in Jaipur in 2005 and I was selected as one of the net bowlers. Before hitting the nets, I gave him a few throw-downs and he was very humble. Never did he make us realise that we were actually bowling to someone like Sachin Tendulkar. He made it a point to talk to us and made us feel comfortable. That was definitely a fanboy moment for me. I still cherish that moment, reminisced the Rajasthan pacer.

He also talked about how his interaction with MS Dhoni, his Chennai Super Kings skipper, became a moment to cherish.

I also have had the opportunity of knowing Mahendra Singh Dhoni from close quarters. I met him for the first time in 2017 at the Rising Pune Supergiant camp. It was during a practice game that I first met Dhoni bhai. I was batting when he came to the ground and unfortunately I picked up an injury on that very day. He walked up to me and inquired about the injury and also advised me on how to deal with injury. That really touched me.As a young cricketer, these are the moments I will always cherish, said Chahar. 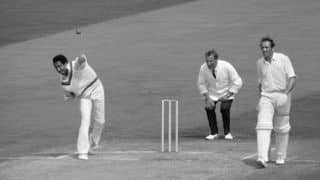