Indian all-rounder Deepti Sharma, who was promoted in the first two ODIs against West Indies, has admitted that batting at the top of the order makes her feel good .

Mulapadu: Indian all-rounder Deepti Sharma, who was promoted in the first two ODIs against West Indies, has admitted that batting at the top of the order makes her feel good and gives a different kind of confidence altogether. Sharma was promoted to the top-order in both the matches of the ongoing one-day series and she responded with responsible contributions. In the first ODI, she made 16 off 40 balls in the first ODI while opening, and scored 32 off 63 balls during the 63-run partnership for the third wicket after coming to the crease at No 3 in the second ODI. LIVE Cricket Updates, IND vs WI , 2nd (Women’s) ODI at Mulapadu

West Indies, asked to make first use of the surface in the second ODI, struggled for momentum and crawled to 153 for 7 in 50 overs. Her partnership with Smriti Mandhana helped lay the foundation for the 154-run chase in the second game. India struggled slightly towards the latter parts of their chase, going from 111 for 2 to 150 for 5, but managed to cross the line in 38 overs with five wickets in hand. When asked about playing at the No. 3 position, she said, It gave me confidence that I was asked to bat one down. I took the responsibility and played according to the situation. I will take this confidence into the next match as well. India beat West Indies by 5 wickets to seal series in 2nd Women s ODI

I am feeling good [about batting in the top-order]. It is giving me a different kind of confidence altogether. I enjoyed batting today and as well as in the first match so I am very happy. I open for my state side since I am a batting all-rounder, Sharma was quoted as saying by the BCCI.tv. Talking about the innings, Deepti said it was important for the duo (her and Mandhana) focused on giving the team a good partnership to build on after they had lost the first wicket early. Thirushkamini first women cricketer to be given out Obstructing the Field

We wanted to finish the match, we couldn t do that. But it was important at that juncture that we stay at the wicket and we were able to do that, she said. Speaking about her role in the 63-run partnership, she said, I usually focus on rotating the strike while playing and that is what I was thinking today as well and that s how we played, so I felt good.

Before making a significant and important contribution with the bat, the 19-year-old had finished as the most economical bowler having conceded only 19 runs in 10 overs during the course of the first innings. I was focussed on bowling dot balls and that s what I did today I didn t get wickets, but that s okay. I contained the batters and that matters, she elaborated.

If other bowlers are getting wickets from the other end, then my job is to bowl dot balls more. At that time, I can use my variations and I did that today as well. I also made good use of the crease and benefitted from that, she added. The all-rounder said having already won the three-match series, the host will now carry the confidence into the next match. The series is part of the ICC women’s championship with the third and final ODI to be played on Tuesday. 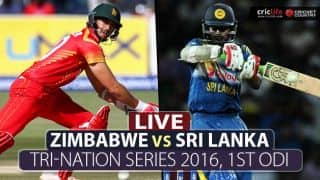