DD chased down 119 with ease after restricting KXIP.

The Delhi Daredevils (DD) recorded a comprehensive nine-wicket victory against the Kings XI Punjab (KXIP) in their Indian Premier League (IPL) 2015 encounter at the Feroz Shah Kotla. A few days after a 10-wicket drubbing at the hands of the Royal Challengers Bangalore, DD managed to regain confidence with this victory. After restricting KXIP to 118 for eight, DD sailed home with almost seven overs to spare.  Live scorecard: Delhi Daredevils vs Kings XI Punjab, Match 31, IPL 2015 at Delhi

On winning the toss, DD elected to bowl having included Zaheer Khan for his first game of the tournament.. And, the veteran rose to the occasion by dismissing Virender Sehwag off the second ball of the game. Zaheer bowled nagging lines early on and had Manan Vohra later on. It was quite a good performance by DD early on, but KXIP were hit by poor shot selection. Nathan Coulter-Nile also managed to pick up four wickets as DD maintained their hold over KXIP.  Live Updates: Delhi Daredevils vs Kings XI Punjab Match 31, IPL 2014

Having lost their first six wickets inside the first ten overs after which David Miller and Akshar Patel put up a 57-run stand to bring some respectability to the total. In the slog overs, they managed to pick up the pace a little, but KXIP were always in trouble right through. DD limited the partnership and ensured they did not allow KXIP to build on that and touch 130.

In reply, Shreyas Iyer and Mayank Agarwal batted very sensibly to overhaul the score. Iyer went on to get a fifty off 38 balls, while Agarwal played second fiddle. Iyer was dismissed for 54 with DD on the brink of a victory. Agarwal calmly brought up his fifty and took DD home. There wasn’t much KXIP could do on the day as they had a low score. Perhaps they would look back and rue a few selections. Glenn Maxwell continued to warm the bench and Thisara Perera was brought back in place of Mitchell Johnson.

Man of the Match: Nathan Coulter-Nile. 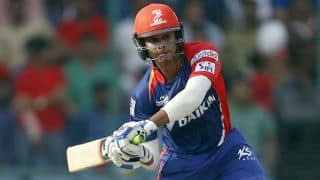 Shresyas Iyer gets out for 54, Delhi Daredevils comfortably placed against Kings XI Punjab