The home side made two changes, with Jayant Yadav and JP Duminy coming in for Mayank Agarwal and Nathan Coulter-Nile. Their opponents made one change for this game, with Shaun Marsh coming in for Marcus Stoinis

The Kings XI Punjab (KXIP)  finished up their innings for a mere 111 for 9 in their full quota of 20 overs. A brilliant bowling display by Delhi Daredevils, led by skipper Zaheer Khan and Amit Mishra made sure Kings XI batsmen couldn’t get a decent total on the board. Only Manan Vohra scored over 20 runs, finishing with 32. Earlier, Delhi Daredevils won the toss and chose to bowl in their second match of IPL 2016 against Kings XI Punjab at Delhi. The home side made two changes, with Jayant Yadav and JP Duminy coming in for Mayank Agarwal and Nathan Coulter-Nile. Their opponents made one change for this game, with Shaun Marsh coming in for Marcus Stoinis. Here are the highlights from Kings XI Punjab’s innings. Live Cricket Scorecard: Delhi Daredevils (DD) vs Kings XI Punjab (KXIP), IPL 2016 Match 7 at Delhi

Zaheer Khan rolls back over the years: A sumptuous spell from Zaheer Khan early on set the tone for Kings XI’s demise. Zaheer, who looked rusty in his side’s first game, bowled beautifully to pile the pressure on the opponents. His first spell of 3 overs yielded just 8 runs, with one maiden, hence proving ‘Zak’ is certainly back in-form. He ended up with figures of 1 for 14 from his 4 overs.

Manan Vohra looks promising, yet again: In a very poor batting performance by Kings XI, Vohra’s batting was a pleasing sight to watch. Having been dropped early on by Zaheer Khan, he made sure he capitalised by scoring 32, before being bowled by an unplayable Amit Mishra. He wasn’t able to get a big score, but another game, and Vohra shows his promise.

Amit Mishra unplayable: ‘Mishi’ boy was at his absolute best, taking 4 for 11 in his 3 overs, breaking the backbone of Kings XI batting. He was literally unplayable, as he claimed the wickets of in-form Manan Vohra and the 3 M’s: Marsh, Maxwell and Miller. Why he wasn’t bowled out was a mystery, but the time during he bowled, he was extraordinarily good.

JP Duminy’s brilliant piece of fielding: JP Duminy was dropped for the first game against KKR. But he made sure his presence was felt in this game, with an outstanding piece of work to remove Wriddhiman Saha. Fielding at covers, he took off and picked the ball in a flash, before hitting an direct-hit, with Saha short of his crease.

Glenn Maxwell fails to deliver: The ‘Big Show’ Glenn Maxwell failed to deliver yet again for his side. The quality and danger Maxwell possess is never in doubt, but his consistency has always been in question. He failed to get off the mark today, getting out trying to hit a big shot. His shot selection, considering the situation of the match was very poor, which will raise questions on his understanding for the game. 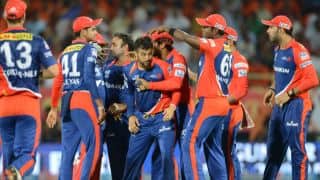