Delhi Daredevils (DD) face Royal Challengers Bangalore (RCB) in a virtual quarterfinal in match 56 of Indian Premier League (IPL) 2016 at Raipur. DD and RCB both 14 points each, but the latter team leads the race when it comes to net run-rate. The team who wins the affair is secured of a Playoffs place in the ninth edition of IPL. While DD are coming in from a resounding win over Sunrisers Hyderabad (SRH )by 6 wickets, RCB—with back-to-back wins over Gujarat Lions (GL), Kolkata Knight Riders (KKR) and Kings XI Punjab (KXIP)—are on cloud nine. Live Cricket Scorecard, Delhi Daredevils vs Royal Challengers Bangalore, IPL 2016, Match 56

Permutations and combinations: With this being the very last match of the league stage of the IPL, the numbers game is very easy to guess. DD and RCB, with 14 points, are at No. 6 and 3 respectively in the points table. RCB are superior because of their healthy net run-rate of +0.93, while DD have a net run-rate in the negatives (-0.102). If RCB win, they are assured of a place at No. 2; but if DD win, they will finish at No. 2. But if the match is abandoned, both teams get equal points, which means RCB will qualify on a higher net run-rate.

RCB batting heavy line-up: In Virat Kohli RCB has now the most destructive and trustworthy batsmen; and with KL Rahul, AB de Villiers performing to their absolute best, the RCB line-up looks to be unstoppable or even immovable. With Gayle coming back to his truculent best, the bowling opposition will hardly find any cover in Raipur. Kohli and ABD have been the pillars of batting for RCB. And, in such high-stake match, they will be eager to get on the playing field.

DD and RCB’s weak bowling attack: Both DD and RCB have been hampered by their bowling, which have failed to live up to their reputation. With loss of Mitchell Starc and Samuel Badree, RCB have been unable to get their combinations right. With the batsmen stockpiling runs, RCB’s bowling weakness has been shielded a bit, but it is only a matter of time that it will again be exposed. DD, on the other hand, haven’t had any bowlers who they can provide impetus. With an inconsistent bowling line-up, DD has time and again ended up on the wrong side of the result. DD’s perpetual habit of chopping and changing has only made things worse for them. The only bright hope for RCB has been Chris Jordan in the last few matches, while Yuzvendra Chahal has kept a tight lid on the runs. While, for DD, it has been Zaheer Khan and Carlos Brathwaite (when played in the XI) who have performed exceptionally well.

Prediction: RCB clearly are the hot favorites in this match, with all their batsmen in devastating form, smashing bowlers left, right, centre and beyond universe. DD does have their task cut out but will not lose hope and only gather much fire in the belly to do the unthinkable. Given this match holds premium importance, both teams will be confident of putting a cricket war-like show at a box office known as IPL. 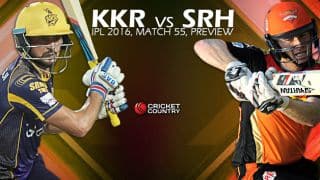