Last month, the court cleared the trio of all charges, saying its hands were tied because of the existing laws of the land.

New Delhi: Police in Delhi announced plans Friday to appeal a lower court’s verdict to clear former Test fast bowler S Sreesanth and two teammates of spot-fixing during the Indian Premier League (IPL). Special commissioner S. N. Srivastava said police had carefully studied the observations made by the trial court and decided to file an appeal before the end of this month. “The court has appreciated our efforts in bringing forth the contamination in sport especially in the IPL. We have sufficient evidence to go for an appeal,” Srivastava told reporters in the capital. The players were acquitted only because of a lack of a specific law to deal with a crime such as spot-fixing, he added. READ: IPL 2013 spot-fixing scandal: Charges against Sreesanth, Chandila and Chavan dropped

Sreesanth and two of his teammates from the Rajasthan Royals franchise, Ajit Chandila and Ankeet Chavan, were arrested in May 2013 along with scores of bookies as part of a police investigation into allegations that players had underperformed in return for cash. The 32-year-old Sreesanth, who played 27 Tests for India, was alleged to have been paid tens of thousands of dollars after agreeing to deliberately bowl badly in an IPL match. Read: BCCI not to lift bans on Sreesanth, Chavan and Chandila

Last month, the court cleared the trio of all charges, saying its hands were tied because of the existing laws of the land. Gambling is mostly illegal in India, but betting on cricket matches thrives through underground networks of bookies. The glitzy Twenty20 league, which is broadcast around the world, has been dogged by controversies ever since its first edition in 2008. READ: S Sreesanth confident of playing in ICC Cricket World Cup 2019 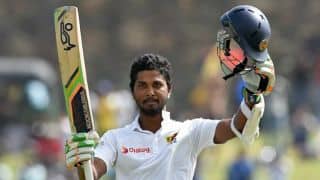