Sri Lankan side were seen sporting masks on Day Two and Day Four while they were fielding.

The ongoing Delhi Test has witnessed four centuries including a double from Virat Kohli. Despite that, the dominating news has been the spectacular on-field shows is that of ‘smog’ thanks to Delhi’s rising pollution. The Sri Lankan fielders were seen sporting masks on Days Two and Four. They suffered from breathing problems, for which the play had to be halted and Kohli was forced to declare the Indian innings early.

Such conditions can be severe on fast bowlers. Suranga Lakmal, who fell sick on Day Two, was seen vomiting on the fourth morning as well. Even Mohammed Shami, who had played down the pollution hype, looked in discomfort in the final session on Day Four. Sourav Ganguly spoke to India Today on the raging issue.

On the current situation

It seems it s getting tough. I saw Mohammed Shami also struggling a bit when he bowled late in the evening today, struggling to run in like Lakmal, he struggled. Like we saw last year, Bengal and Gujarat game was called off because of smog in Delhi, not a single ball was bowled in all four days. Definitely there are issues: how much it is you really don t know because we are far from it, how much the players feeling it but it is so difficult to see masks on a cricket field.

On scheduling games in Delhi

I don t know how they breathe, how they keep running and how they play cricket because you have to breathe properly and I don t know whether with those masks you can do it. This needs to be taken into consideration at some stage when winter comes and Delhi gets a game, may be give Delhi a game before Diwali or after New Year or may be in the month of February and March when everything settles down. This needs to be genuinely looked at and I hope they all finish the game healthy. 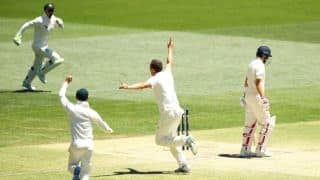